Anyone who's already sailed have a feeling yet for how much time under sail versus time in tow on the legs?

Although I haven't sailed yet, I can give you one rough estimate. On the first leg from New London to Newport, I understand that the Morgan was under tow from New London, through Fishers Island Sound and then put up sails and dropped the tow near Watch Hill, RI. They sailed in light winds through the morning and early afternoon. I checked the AIS periodically (I recommend the MarineTraffic app for Android and iPhone/iPad) and saw that they were managing about 2-3 knots gliding slowly along, just a mile or two off the shore of southern Rhode Island. Watching through binoculars from Point Judith, it appeared that they were under tow again starting around Matunuck, and they were certainly under tow --with most sails up gently moving in the breeze-- past Point Judith and on up to Newport. I've made a simple map, attached here, with the blue track indicating the periods when she was under tow and the green indicating she was sailing without the tow (the wobbly details of the track line are not real). As you can see, by miles, the sailing period was less than half of the New London to Newport leg, but by hours it was probably just about half. Bear in mind that the sails were still up when she was under tow and if the wind had not been so light that day I expect they would have sailed more. From Boston the Cape Cod Canal, there should be many hours of sailing possible on your voyage leg. 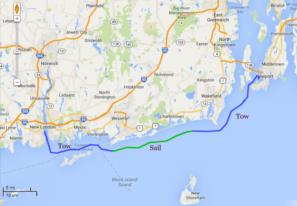