The claim of 1' without electrons is impressive, yet my high end programmable electronic calculator in 1975 was ~$400, including the printer.  Roughly 1/20th the price and the calculation was accurate to several decimal places, far exceeding the claimed device accuracy.

I would like to understand how this device functions!

Now here is an interesting navigation slide rule - and 3D too...     The Astra-Plot a "three dimensional slide-rule" for celestial navigation, 1969

According to the writeup:

Five specific data to specify the location of a ship 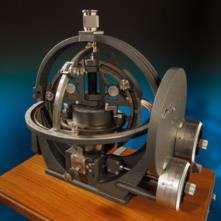