Dave, you wrote:
"a superb example of an analemma, but I’m coming round to the view that it’s construction or at least a transposition."

You're right: it's a transposition. The photographer is a well-known astrophotographer in Spain, and he did create the analemma itself over the course of an entire year. But then for dramatic effect he superimposed it above an image of the local cathedral in Burgos. The cathedral does not face in the correct direction so this cannot happen in the real world. He did win an astrophotography prize for the image nonetheless. Here's a brief description confirming this the website of El Pais:
https://verne.elpais.com/verne/2017/12/23/articulo/1514049323_820824.html
And another article:
https://cruzdelnorte.com/blog/2017/02/13/analema/
(both in Spanish, but automatic translation will do a good job if you can't read it)

I show Dennis DiCicco's photo of the analemma from 1978/79 in nearly every celestial navigation class I teach and talk about how difficult it was to produce and plan. I also talk about modern analemma photos and point out that they are much less difficult to create as an annual time-lapse montage, and also, unfortunately, they are much easier to fake entirely or edit in such a way that the difference between fake and real gets lost in the pixels. I don't think there's much to be impressed by in a modern digital "photo" of the analemma.

The caption is a nuisance. Some childish individual added the bit about the "symbol of infinity" a few years ago, and it is often shared this way on social media. It is also often cropped. Here's another version that is, I think, close to the original composition... 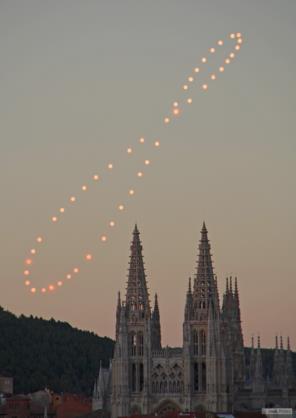