As for " Mercy Mission ", the movie shows ( correctly ) that the captain of the Air New Zealand aircraft was an ex-american military pilot who lived in New Zealand for many years.  All other crew members and air traffic people were Kiwi.

Captain Gordon Vette was NOT  an ex-American military pilot! I suspect that is an impression created by Hollywood to help sales in the US.

I have attached a page from Vette's book Impact Erebus in which he describes his career. He was an aircraft maintenance engineer, an ALTP, a flight instructor and a navigator. He had a short service commission in the RNZAF not the USAF. Investigating the DC10 crash on Erebus was another milestone in his career. I will not discuss it as it is off-topic - it involved electronic navigation and whiteout in Antarctica. 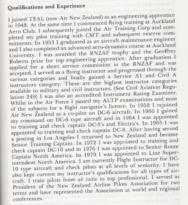