Last night in a post, I speculated that you could get a rough idea of the difference in azimuth of stars by examining their difference in SHA.  I wasn’t entirely happy with that statement, hence my use of the word ‘roughly’.  This was not a good problem to go to bed with.  After much thought, I concluded that it might only be true close to the poles.  Study of AP3270/HO249 Vol 1 this morning shows this is true at the poles but gets progressively more untrue the further from the poles you travel.  By the time you get to the latitude of Belgium it’s not much use.  Even the difference of the differences isn’t constant.

Having thought more about this problem I decided to try and draw it.  With the observer at the pole, the PZX triangles become straight lines emanating from the poles towards the stars separated indeed by the differences in their SHAs (Fig 1).  Trying to draw the problem for other latitudes is still taxing my drawing skills and brain power, because the difference between Zn and SHA would appear to have no easy connection.  Although angle X1 P X2 remains constant in fig 2, angle X1 Z X2 appears variable depending on latitude and declination. DaveP 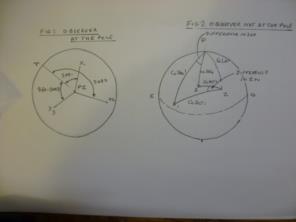