Of course since Charleston was a significant port with many maritime interests, it wouldn't be suprising to find a street named for the geographic coordinate (and I don't think it requires the rather involved "tale" in the link I posted a few minutes ago). But just as well, maybe it was named in the sense of the (more common?) meaning. Naming a very short alley as "Longitude Lane" could be nothing more than a little ironic comment about its lack of longitude --its lack of "length".

The image below is (apparently!) from Samuel Johnson's "Dictionary of the English Language" first published in 1755. Longitude as "length" is definition number one. For the third definition, essentially modern longitude, Johnson has "His was the method of discovering the longitude by bomb vessels". Aha! ... And so, Navigation Trivia Fans, who was that "His" referencing? :) 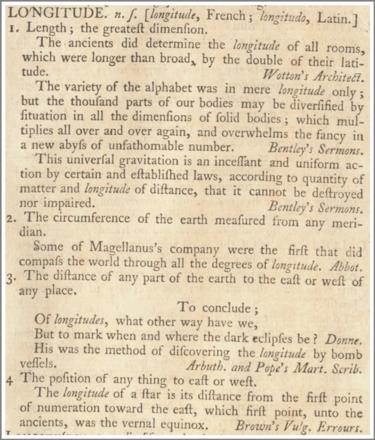