Maxwell wrote:
"whilst she was undoubtedly hugely unsafe by modern standards we were all old enough, I was twenty six, to be able to take responsability for our own destiny and decide whether the risks were worth it."

A little background for those unfamiliar with the story. The Marques was a bark-rigged "tall ship" (see image below) that sank thirty years ago in the early morning hours of June 3, 1984 during a sailing race just a few hours after departing Bermuda. Nineteen people were lost including Sue Howell, who I knew personally through the planetarium at Mystic Seaport. Sue was the sole author of the excellent textbook "Practical Celestial Navigation" which many NavList members are familiar with. The Marques was caught in a squall north of Bermuda and sank in less than a minute. Those on deck mostly survived. Those below did not.

Apologists (both those with legal concerns and also those with romantic notions of the adventure of sailing) attributed the sinking of the Marques to a "rogue wave" or some other insurmountable weather phenomenon. In other words, they blamed it on an act of God. Other vessels in the race reported nothing of the sort, and survivors' stories did not suggest any extreme weather beyond a common squall. The simple explanation appears to be that they were hit by a squall with too much sail up. The vessel heeled over to an angle from which a properly designed vessel should have been able to recover (but not the Marques), and it flooded and sank like a rock. By far the best account of the sinking of the Marques and the design errors leading to it can be found in Dan Parrott's "Tall Ships Down". I highly recommend it. If I am remembering correctly (consult the book for details), the Marques was designed and launched in 1917 as a typical Mediterranean coasting/pilot schooner with a relatively small sail plan. Later its sails and masts were removed, an engine was installed, and it operated as a coastal cargo carrier along the Spanish Mediterranean coast for many years. It was later sold to an English owner who converted it to a sailing yacht. In the 1960s and again in the 1970s the sail plan was greatly increased, first in brigantine and later in bark rig, so that she would "look the part" of a historical ocean-going ship in a couple of movies. Meanwhile a very large deck hatch from her early days as a cargo vessel was left in place. Parrott lays out the case in detail demonstrating that the Marques was seriously deficient in basic stability and, if heeled over, that big open deck hatch would lead to immediate flooding. She was not seaworthy. The sinking of the Marques is often credited with having led to a revolution in safety standards for sail-training vessels.

Maxwell, I am not convinced that you knew the risks and could rationally decide whether they were worth it. That sounds more like a declaration of faith in oneself. More power to you for having that faith, but it doesn't mean you were making a rational choice. I am sure you had some general notion that sailing in an old vessel was "risky" and you could reasonably decide to take on those rather vague risks, but the specific, serious flaws in this vessel were, I am sure, unknown to you ...just as they were unknown to the nineteen people who were lost at sea in the middle of the night those thirty years ago. 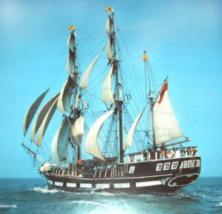