I could not see the film yet, but try to give a half solution for the first picture.

I must admit, I solved the problem reversed: I had to check the Pleiades to identify them (they have a quite different local name here), and found the location based on the search results, very easy. I did not know that boxer engines has so close relations to astronomy. :-D

Than I tried to find astronomical evidences on the first image. Identifying few stars in this order: Aldebaran, Elnath, Mirfak, Capella, Belaltrix and the Orion belt between the two buildings including Alnilam. (There are further nav stars on the right side, like Diphda, and Hamal might be hidden by the building, but I did not identified them). Although Orions sword could not be seen, the arrow can be found by Sai al Jabbar (HIP 25281), so the direction to North is given (solid green line). It can be fined with Elnath and Bellatrix, having almost identical SHA they point to North too.

The image has a very strong distortion, so every straight line will be misleading, only short sections can be trusted!

Finding a vertical is not easy on this image due to it's distortion. It tried to project some assumed verticals, and draw the local vertical at Mintaka from this remote point (dashed yellow). Now we can measure the tilt of the equator, that is approx 18°, meaning Latitude N18° (North Lat because it i stilted to South). The real observatory is at N19°49' (the dotted blue line). The difference may be from my imprecise construction.

East should be where the equator bisects the horizon. It is very difficult to find a good horizon on this picture, and it should be an arc instead of a line. I just draw an arc, it is very rough, and found that e look a few degrees south from east (approx Zn 100°?), but I am really in doubt with this.

Completly exhausted, and left the second image for a next run. 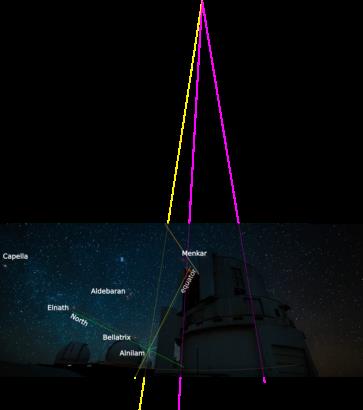