Sure. Much of this is correct! But there's trouble with nutshells: they have very little internal volume and they tend to hide important details. :)

An Elephant in a Nutshell:
Once upon a time in ancient India, an elephant arrived in a village. It was the first elephant this small village had ever known. Four wise blind men went to investigate the strange creature. One felt its trunk and announced, "The elephant is a type of giant snake." Another felt its leg and called out, "The elephant is a living tree!" Another of the blind men, feeling its side, confidently stated, "The elephant is a great wall. Of this there can be no doubt". Still another of the blind men felt the elephant's tail and proclaimed, "The elephant is a living rope." Hearing each other's radically different descriptions, the men began to bicker. How could there be such different descriptions of one animal?! A snake cannot be a tree. And even a rope and a snake are very different things. And it's obviously not a wall! But the wisest among the men called for calm and announced he had a plan to eliminate their differences. He called for the husk of a great walnut. Carefully and with great effort, the men pushed and prodded until they had forced the elephant inside the nutshell. They sealed the sides, all could feel the shell of the nut and agree that it was a nutshell. They could agree on the properties of an "elephant in a nutshell".... Oh, and upon being told that the shell was a walnut, one of the blind men was heard to mutter, "Pff. Told you it was a wall".

There are a few pieces in your nutshell of celestial navigation that place undue emphasis on certain details. For example, you say there are 2 billion GP's. But really there are an infinite number of GP's available to us, and it's probably fair to say that the number of them doesn't matter. The standard Nautical Almanac really only lists the positions for every hour of every day. The "increments" in the back are merely interpolaton tables. They do not give us independent positions for every second, and indeed if you have a cheap calculator and a copy of the Nautical Almanac with the increments torn out, you can easily interpolate between the tabulated positions. You can interpolate to any instant of time. There is no limit to the nearest second. So if you want a "count" of the available positions, work out the number of hours in a year and multiply by the number of bodies (btw, you missed one, didn't you?), or equally valid, you can recognize that the count of positions is actually infinite, which means that counting GP's is really irrelevant... (Irrelevant? "once upon a time in ancient India, six blind men approached an irrelevant..." ;) ).

That's just one little issue. There are a few other bits hiding in your nutshell that I'm sure others will comment on. 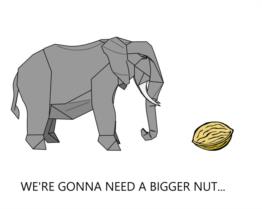