I’ve always wanted to try a fix at sea with a marine sextant, but I’ve never had the chance, and not living near a south facing coast, I don’t suppose I ever will get one.  Therefore, I decided to see if I could get one inland from the ‘Astrovan’ using an ex-RAF Smith’s Mk2C pendulous reference periscopic sextant.  This particular sextant has been averaging about -2’ instrument error for low Hs s.  I seem to remember Frank saying that the best method was to take a series of shots at least 30 minutes either side of noon and draw a graph to obtain meridian passage time, but so far I’ve always been either too busy or it’s been too cloudy to complete the exercise.

Today, I realised about that the forecast cloud wasn’t going to materialise, and this might be our chance.  We decided to make 31 observations two minutes apart between 11.30 and 12.30 with me doing the observing and Mrs P calling the time and recording the sextant heights.  First we had to open up the Astrovan, light the gas fire, and put the sextant up.  Before we could do this, I had to climb up to the roof and hack about ¼” of ice from the sextant mounting, during which process I managed to break my second best ruler, which proved no good for stabbing ice, brittle fracture being the result.  Finally we got our first observation at 11.32 hoping that mer-pass might be after UTC.  I’d love to say that we deliberately avoided calculating mer-pass time in advance to avoid subliminally biasing the results, but in fact, we simply ran out of time.

All went remarkably well, and we finished in time for lunch.  The observed values seemed a bit jumpy, but they plotted out fairly well with artistic license taking priority over least squares when necessary.  I wasn’t sure how high to take the top of the graph, but in the end I decided to ignore the top two readings and follow the curve.

The results were as shown in the photos below. The n-s error was 0.5nm and the e-w error was 1.4nm.  I’ve been observing using an upper or lower limb on the horizontal graticule recently, but I can’t say there’s been any improvement in my results, so today I reverted to Sun in the middle of the circle and was happy with that.  DaveP 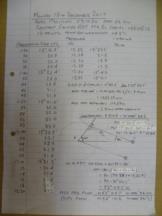 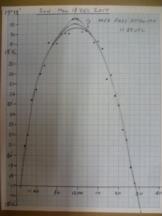