Here is a diagram as I see it.

I think I can see what your are missing. When we learn celnav we work with the assumption that the earth is a perfect sphere and a degree on the surface, as measured at the center of the earth, is everywhere 60 nautical miles. This assumption is appropriate given the level of accuracy that is obtainable at sea with celnav. Based on this assumption we also accept that straight down at our position points to the center of the earth so the horizon, from which we measure our altitudes, is exactly at right angles from a line from out feet to the center of the earth. If this were true then, when we take a noon latitude, we would be determining our geocentric latitude, the angle between the equator and our position as measured by a person at the center of the earth. This is the simplified diagram that we have been trained on.
However, there are two other types of latitude, geodetic and astronomic.
What we are actually determining is the last type, the astronomic latitude. Because of the oblateness of the earth and because of local deflection of the vertical due to non uniform density, the horizon is not at right angles to a line from out feet to the center of the earth but is at a right angle to the local field of gravity as it is deflected from the tangent to the surface of the oblate earth. As to deflection of the vertical, Frank has posted before about this effect in the vicinity of Bermuda but is is usually very small, maybe a few tenths of a minute, is not charted so it can not be corrected for by a navigator,
If you could correct for the local deflection of the vertical then you would be able to determine the geodetic latitude, the latitude as measured from a horizon that is tangent to the surface of the oblate earth at our position but because the deflection of the vertical is very small we ignore it (in celnav) and treat our astronomic latitude as though it were geodetic latitude. Why do we do this?
Because charts show the positions of places on earth by their geodetic latitude, not their geocentric latitude. That is the reason for the meridional parts, to allow creating a chart in which the latitude determined with a sextant will correspond to the latitude of the shoreline. (ignoring deflection of the vertical.) That is the reason that the length of a degree on latitude varies because it is based on the oblate earth (the Clarke spheroid of 1866 in Bowditch). If, instead, the shoreline was placed on a chart with a gratical  of geocentric latitude then it would be off by about 11 minutes of latitude at latitude 45 north and south so you would be crashing into reefs all the time.
So forget the simplified diagram of geocentric latitude, now you know the true story.
gl
From: Lu Abel <NoReply_LuAbel@fer3.com>To: garylapook---.net Sent: Wednesday, October 7, 2015 12:07 PMSubject: [NavList] Re: The magical maths of Google Maps

I have no doubt of these numbers, Gary -- and at the same time they seem counterintuitive.   If I were to fit a perfect sphere to the curvature of the earth at the equator it would be - as you pointed out earlier - about 11 nm greater in diameter than a perfect sphere that matched the curvature of the earth at the poles.  A greater diameter should imply a greater surface distance for one degree than for a smaller diameter.   What am I missing? 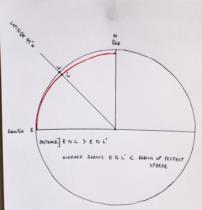