Gary LaPook, you wrote:
"I think I can see what your are missing. When we learn celnav we work with the assumption that the earth is a perfect sphere and a degree on the surface, as measured at the center of the earth, is everywhere 60 nautical miles. This assumption is appropriate given the level of accuracy that is obtainable at sea with celnav."

Exactly. Another way of thinking about this is to recognize that actual distances don't really matter much in celestial navigation. If you travel from a point on the equator to a point with latitude 45° 00.0' N using celestial navigation, it doesn't matter how far you have actually gone in miles, unless and until you need to compare with some other form of measuring distance like dead reckoning or the work of surveyors (includin, but not limited to, GPS). I would say that it's really because dead reckoning had such low accuracy that this was never an issue for celestial navigators historically.

When we draw our circles of position and solve our fixes and do all the things that we do in celestial navigation, we're really doing our "drawing" on the celestial sphere (or on any pure mathematical sphere centered on the Earth's center and aligned with the Earth's axis, which we might as well call the celestial sphere!) And of course on that sphere every degree is exactly 60 minutes. When these perfectly spherical coordinates are "pulled down" from the celestial sphere using the local vertical, we get astronomical coordinates, the latitudes and longitudes of celestial navigation and astronomical positioning (including, by the way, the slightly offset longitude at Greenwich).

We could, if we wanted, use perfectly spherical coordinates for latitudes and longitudes on the globe today by "projecting out" coordinates that are pure mathematical spherical coordinates from the Earth's center. This is how nearly all planets, moons, and asteroids are mapped off-earth today. If you want to make a map of coordinates on a "lumpy" asteroid like Vesta or even a highly irregular small object like the asteroid Eros, you find a center (usually the center of mass), pick an axis (usually the principal axis of rotation) and select an arbitrary zero point for longitude (usually the "center" of a distinct small crater). Then you project out normal spherical coordinates, as described in any math textbook. And where those coordinates intersect the surface, you draw the lines of latitude and longitude. Note that this process depends on acquiring the locations of the points of the surface by direct measurement or by some omniscient means (for an asteroid, via cameras taking images from many different locations).

Coordinates on the Earth have evolved into a compromise between these two different ways of generating latitude and longitude coordinates. Our modern coordinate systems, like WGS84-based latitude and longitude, are fundamentally much closer to the pure mathematical ideal of coordinates "projected out" from the Earth's center, but the latitude has been modified to match the overall ellipsoidal form of the Earth's effective gravity (that's pure gravity plus the centrifugal force from rotation). This shifts latitudes, as Gary described earlier, by a maximum of 11 minutes of arc at latitude 45 degrees in both hemispheres. This compromise was not necessary, but it's useful and practical since it reduces the discrepancy between astronomically determined coordinates and modern coordinates based on exact measurements of position. This choice reduces, but cannot eliminate, the difference between coordinates "pulled down" from the celestial sphere, as in celestial navigation, and those "projected out" from the center of the Earth, as in modern standard coordinate systems, like those based on WGS84. There are still small differences of a mile or even more near prominent tectonic features, but usually just a small fraction of a mile, because the Earth's gravity field is lumpy like an asteroid's, but on a small scale. The surface which describes these lumps in gravity and the associated "deflection of vertical" or DOV is known as the geoid. Note that this is a physical surface that must be measured, not a mathematically-defined abstraction like the ellipsoids in the various datums of geodesy. In recent decades, the geoid has been mapped and charted in detail.

The consequence of all of this for celestial navigation is relatively small. Because terrestrial coordinate systems use that slightly-modified version of latitude derived from an ellipsoid, the primary component of the difference between astronomically-defined coordinates and pure spherical coordinates has been taken care of. We don't have to worry about that 11 minutes of arc offset in latitude (zero at the equator and poles, maximum at 45 degrees latitude). It's built into the coordinate system. The small deviations in the vertical that are described by the surface of the geoid can be charted now and if we're worried about position accuracy better than one mile, then we should apply the DOV to every fix we get by celestial means.

The images below show: 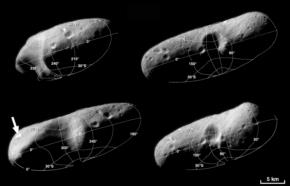 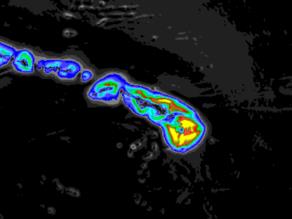