While there are many in the collections of Mystic Seaport Museum, I came across this example of a "lon by Lunar" in a whaleship logbook from 1845 on archive.org. There are no calculations. Just the result (see the image below).

The ship is returning to New England after a successful whaling voyage. Position is given for "Latt Obs" (latitude, almost certainly by noon observation) on both days and "Long by Lunar" on Tuesday, "Long by chro" on Wednesday. "Long by Lunar" implies GMT determined by a lunar distance observation while "Long by chro" implies GMT from a chronometer. In both cases, local time would have been determined by a morning or afternoon "time sight" (just an ordinary altitude of the Sun, worked up to yield the local time --effectively turning the sextant into a sundial).

On the afternoon of May 13, 1845 the Sun-Moon lunar distance would have been about 81 degrees, close to First Quarter, which would be very convenient for lunars. As is so often the case, this would have been an Upper Limb orientation of the Moon. We can estimate the approximate amount of clearing correction just by looking at the orientation of the Moon in the sky, the approximate altitudes of the Sun and Moon, and by looking up the HP of the Moon in the almanac or another database.

Let's suppose the lunar waas shot around 1930 GMT (the navigator had a chronometer so there would have been no problem looking this up --even if the chronometer turned out to be wrong by a couple of minutes, which is the whole point of shooting the lunar). The HP for the Moon was 54.9' at that time. So you take the observed distance, add the SDs to get the center-to-center distance which would be something around 81° at this time. Then clear for the effect of parallax and refraction. The altitudes of the Sun and Moon would both have been above 45° which makes the refraction correction easy. When both objects are above 45°, refraction compresses all angular distances by about one part in 3000, so given that the angular distance is about 81°, the refraction correction is 1.6' which is 81·60'/3000 (we add that on to take out the effect of refraction).

Parallax pushes the Moon toward the horizon and since the Sun and Moon are on opposite sides of the sky, removing the refraction would decrease the measured distance by an amount equal to the actual parallax in altitude (which is HP·cos(alt_moon) or about 35' if the Moon's altitude were 50°. This would be the actual correction if the Sun was aligned directly above the Moon. In this case, just looking at the Moon in the sky, we could see that the horns aren't quite horizontal. They're tilted about 12 or 13°. That means that the angle ZMS is also 12 or 13° and the "corner cosine", which tells us what fraction of the altitude correction acts along the lunar arc, is then about 0.98. So the net correction to the distance is nearly 34' from parallax. Subtract 34' and add 1.6'. You get a net subtraction of about 32' give or take a minute of arc. That yields an approximate value for the cleared lunar distance.

Doing very little math and merely looking at the orientation of the Moon's horns, we can get a good rough approximation to the cleared lunar distance. And that's what we compare with the tabulated distances in the almanac. Why would we ever want a rough approximation to the cleared distance? Remind me if I don't get back to this soon. There was a little family of clearing methods which benefited from a good, approximate first guess.

Finally, note that this geometry for lunars was very common historically, and if you want successful lunars today, you'll see why as you experiment. You'll have the Sun and Moon near 90° apart with the Sun on one side of the sky and the Moon on the other. The Moon's illuminated limb points up and the horns are relatively horizontal (especially in lower latitudes). Since this geometry is so common, you can expect that the clearing process will almost always reduce the center-to-center distance from what you observe --the correction is usually net negative. But also note that if the Moons horns are nearly vertical, then there's no parallax correction at all (the Moon is lifted in a direction perpendicular to the Sun-Moon arc that you're measuring). 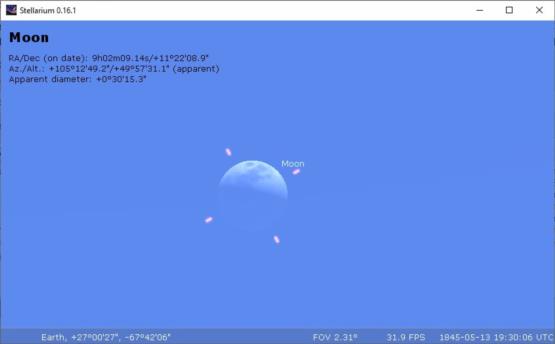