David Pike, you wrote:
"The camera is approximately 14,000km above the USA."

I finally got around to doing the calculation myself. I got just a bit more than 13,000 km or 7050 n.m. or approximately 2.05x the radius of the Earth. Your altitude is only slightly different, so clearly we're on the right track. The difference is in the details. Using my numbers (because they're the ones right in front of me), I calculate an angular radius for the Earth of 19.1° (ang. dia. is twice that, of course). Given this, I think we can also answer your question, Brad. If you draw the right triangle for this, you can see that the angle at the center representing the maximum distance that we can see is just 90°- ang.radius so we can see around the globe to a distance of 70.9° from the sub-camera point.  Using Sean's sub-camera point at 33.6°N, 95.4°W, you could draw a circle of position centered on that point with a radius of 70.9°, and every point within it would necessarilly be visible. So, yes, the North Pole would be visible, very close to the edge, but it appears to be in shadow, implying that we're in early fall or late winter (I'll go with fall). Note that this is considerably less than one hemisphere. To view this image so that the perspective makes sense, you need to plant your eye close enough to your monitor so that the disk of the Earth is 38° wide. That's gonna be pretty close.

The attached image is just part of my analysis. I marked out the disk of the Earth so I could see the un-illuminated section better, and I measured a few distances (those are in pixels). 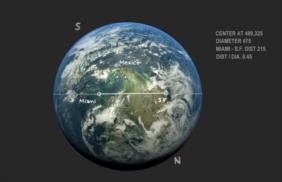