David, you wrote:
"I must be a real celestial philistine."

No, you're an air navigator (or is that the same thing?). And in the air, meridian sights are never used, primarily because they are significantly altered at any speed above five knots and radically altered at speeds above a hundred knots.

"I always have to think twice when I read zenith distance, because I can never remember whose zenith."

Um, that's just a bad habit: allowing yourself to insert your own expression because of a simple misunderstanding. You can't remember whose zenith? There is only one zenith: your zenith as the observer. The expression "zenith distance" was a common, nearly universal term in celestial navigation for over 150 years. As celestial navigation decayed under the impact of entropy in the late 20th century, and navigators were taught that Noon Sun sights were pointless, the term became less common. But it's still the most common in the literature. I do agree though that you could call it co-altitude without much loss of meaning. Incidentally, it is remarkable how many navigators who learned the subject in the late 20th century firmly believe, even today, that there's nothing useful in a Noon Sun sight. It's just another sight, they were taught. They all yield lines of position. So ignore the noon sight! Besides, you have to draw some weird little meridian diagrams, else you'll get the rules wrong! ...and there's a different rule for every case. Very messy. So yeah, we might as well ignore the noon sight. It's such a shame...

You added:
"I’m not much good at remembering formulae these days"

If you can't remember Lat = z.d. + Dec, then write it on an index card and stick it on your refrigerator or on the corner of your television or your bathroom mirror ...somewhere you'll see it every day. It's easy, and it's vital. I made you a mockup (see below). :)

You wrote:
"so for mer-pass calculations, I end up drawing a fresh 2D diagram every time. Then you don’t need to worry about when to use plus and when to use minus in a standard formula. Am I the only one?"

Horrible. Horrible. Horrible. O so incredibly horrible! Ok, maybe not that many horribles, but I had to get it off my chest. :) No, you're not the only one, and a great many people were taught that this was the right thing to do for decades. But it's insane: you're re-inventing the wheel every time. Don't re-invent wheels! This approach is an artifact, a relic of the decline of certain types of navigation in the late 20th century, not because those forms were obsolete, but because the science of navigation was replaced by the craft and practice of navigation and accompanied inevitably by the decay of navigation. It's also an echo of that earlier era when un-mathed navigators could not be expected to deal with positive and negative numbers. And so they had it beat into their sorry skulls that they had to draw a diagram to handle the various cases, and they were expected to reproduce those diagrams on exams. And then the exams became more important than the navigation. This is how it was taught to me, too, and it's how it's still taught in many textbooks and schools because of the terrible inertia of bad teaching and poor explanations. Except for one other type of sight (a "Midnight Sun" or "below the pole" meridian sight), there is no call to draw diagrams because there's only one rule to know. It's Lat = z.d. + Dec with the important understanding that these numbers can all be positive or negative, and with the rule that z.d. gets marked negative whenever your shadow points south at meridian passage. The logic of algebraic signs handles all those "cases" that navigators had to fuss about in earlier decades...

PS: Herman Dekker noted: "Is the difference between Z.D. Zone Descriptor and z.d. for zenith distance, most of the time not indicated by Capitals for Zone Descriptor and lowercase for the zenith distance?" Yes. It's certainly sufficient with the right sorts of students. The catch here is that many navigation students are only casual students, and they're accustomed to taking notes in all upper case (or in "haphazard" case). 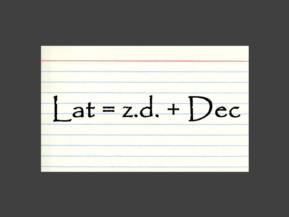