Attached is a previously unpublished painting in my possession, of my great-grandfather's topsail schooner Grace, c1890. He would have used the same standard 5 figure time sight procedure as Alastor, when carrying STEAM coal from UK to Newfoundland.

It was whilst emulating my great-grandfather by reducing time sights afloat on my own boat that I realised how many tables and openings were needed, also preferably with good lighting and eyesight.  I had previously used Reeds 4 figure versine method, and Greg Rudzinski's all haversine method ( converted to time sight with versines) with good results, especially since the running-on vector depended on relatively crude measurements of speed , heading, yaw and current. Despite the merchant marine using their method for over a century, aviators quickly simplified things.

My grandfather, who sailed in Grace, and with whom I sailed, had no grasp of trig or logs when I was learning this at school, but could certainly assess speed and direction through the water.

Grace is shown here reefed down, near West Hinder, eastern English Channel.  Compare with the full sail picture posted in NavList on 14 Jan 2019.  The water damage was caused by a hole in the roof made by an incendiary bomb which didn't explode.

Now for another link with steam.  Grace was sold on to another owner.  Whilst positioning from Exeter to Teignmouth for kaolin, he took a tow to save time. The towline parted, and the steam tug was unable to recover the line. Grace was driven ashore and lost, on 16 Oct 1907. 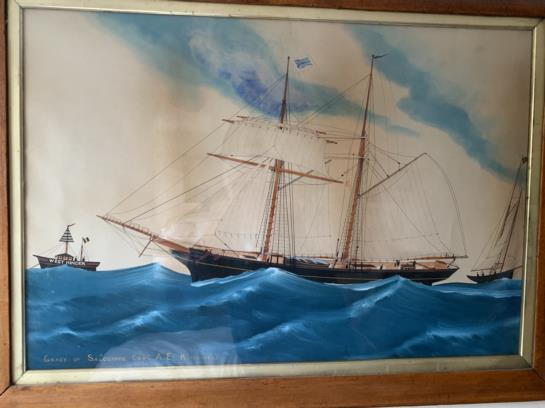