Many readers and critics of Dava Sobel's "Longitude" (published 25 years ago) assume that she invented the anti-Maskelyne "point of view" in her book. I have tried to emphasize on various occasions over many years that the attitude was common, even normal, in historical accounts long before she wrote her book. I did, however, believe that she was the first to come right out and call him a "villain". But I've found another example, from fifty years before her book, in an article by a Capt. Sheehan, USN, published back in 1944. See attached.

As I have said before, Maskelyne was many things, but villain? No. That's too extreme. And on top of it, Sheehan also calls him a "brilliant scientist" in the same paragraph. A scientist? Yes. Brilliant? I would say that's just as over-the-top as calling him a villain! But I suppose it makes for better drama in these history+legend re-tellings to label him as both. A "brilliant scientist villain" would be something straight out of James Bond. 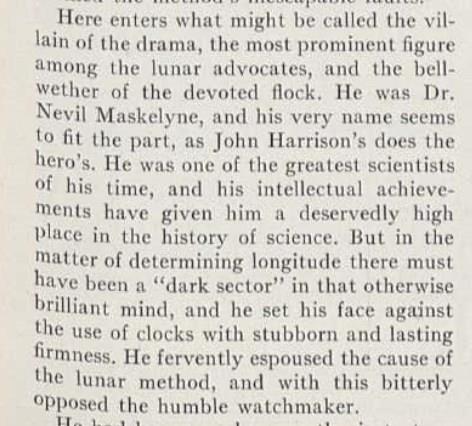