Robert Goldberg, you wrote:
"My question in turn is, does that mean the GP of the celestial object is 90 degrees x 60nm/degree = 5400 miles away from me (ie. am I on a circle with a radius of 5400 nm)? I can envision this easily if the celestial object is on my same meridian or if I am on the equator taking a sun sight and it happens to be the equinox.  But at other times of the year and day and at northern and southern latitudes, does a Ho of zero imply that the GP of celestial object is 5400 nm away from me?  When I am using my sextant,  am I measuring distances along a great circle regardless of what my latitude or time of day it is?"

Yes, you have it right. This is exactly the fundamental principle of celestial navigation. The underlying geometry of every celestial altitude sight is a circle of position centered on the subStar (subSun) point of that celestial object. The Declination of the star or Sun is no more and no less than the latitude of that point where the star or Sun is at the zenith. The GHA of the star is the star's longitude (but always a West longitude). Together these two coordinates uniquely define the position of any celestial body. If we go there, to the lat/lon equal to the Dec/GHA of the Sun at any instant of UT/GMT, the Sun is at the zenith there at that instant. If we travel 60 nautical miles in any direction (with time stopped, preventing the Earth from turning for the thought experiment), the altitude (corrected altitude, or Ho) drops by exactly one degree. At all points 60 nautical miles from the subSun point, the altitude of the Sun is 89°. This isn't an analogy or a simplification or a "cartoon" version of celestial navigation. This is exactly how it works, and the rest is "mere algorithm". This "underlying geometry" is a direct geometric result that depends on the Earth being a sphere and the fact that the celestial objects are at very great distance commpared to distances on the ground. For any sight that you take, if you correct it in the usual way and then subtract from 90, the result is the distance in degrees from the subStar of subSun point, and therefore that sight by itself necessarily places you on a giant circle centered on the subStar point.

Suppose you observe the Sun when its Ho is exactly zero a little before sunset. Who else on the globe would measure the same angle at the same instant of time? Of course it's that set of observers who are also watching sunset and also those who are watching sunrise and finally a vanishingly small set of observers who are seeing the Sun just peaking on the meridian at an altitude of zero. If we plot out all their positions, they lie on a circle with a radius of 90°, and this is the rare case where the circle of position itself is a great circle. It's also easy to visualize. When photos of the Earth are taken from space, the shadow line or "terminator", as it's known in astronomy, is a visual representation of this circle of position. You can see this circle of position without drawing it. See image below.

PS: These images are from a recent online run of my Modern Celestial ONE workshop (for anyone interested). New set of classes starting January 23: details. 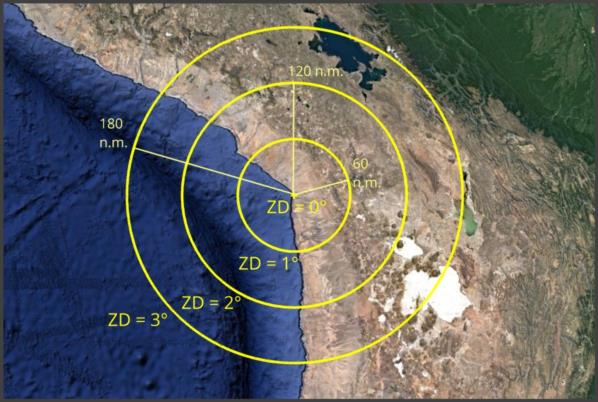