All this argument about decimal points of position, and still no one will answer my original question.  What is the accepted name for such fixes?  Is Zenith Fix correct?

Reply
As I understand it all projections can be correct, but only when used appropriately.  It’s a bit like all weeds being beautiful flowers in the wrong place.  A couple of years ago during a during a discussion on William Bligh’s navigation of Bounty’s longboat with minimum equipment it was suggested that he was so close to the Equator (20S-10S) that he wouldn’t have gone far wrong if he’d ignored convergence altogether.  All I wanted to show was the use of circular celestial lines; the exercise was close to the Equator; and I was in a rush to get on with the Appleyard Course and Distance Computer, so I thought I’d see how I got on using a square grid.  It soon became apparent that 19S was a couple of degrees too far south to get away with it, and I had to modify my diagram.  It became a case of more haste less speed.  In fact, once you’ve allowed for that 29 minutes at 12 kts at 164 degrees between 11.21 and 12.00, using a square grid wouldn’t have been too bad, differing from Andres’ fix by about 3-4nm E-W.  You’d also have to bear in mind that using 164 degrees would be a bit out because the square grid wouldn’t be conformal at 19S.  Once again, more haste less speed, better to draw a proper chart to start off with.

Tony Oz you gave some figures.  They look OK to me, but you don’t say how you used them.  Did you draw your circles on a chart, or did you put the figures into a computer programme?  If the former, depending upon the size of your chart and the thickness of your pencil lead, I wouldn’t worry over the odd mile difference between plots.  If the latter, I’m not into digital, so I can’t give an opinion.  Don’t look too closely at the figures; look at the points plotted on the chart to get a true feel for the difference.

Andres, Mike, Tony, for your delectation and much to the expense of time spent making the Appleyard, I’ve redrawn my chart properly and plotted your positions and the square grid position too.  You’ll see they’re all within a crumb from the navigator’s biscuit or a dot made with the point of a sharpened bar of chocolate. DaveP 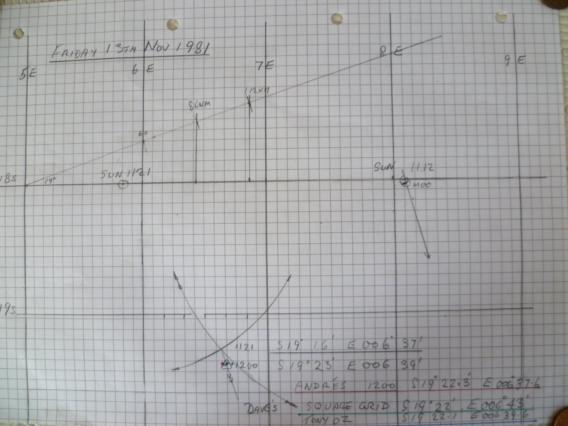