Yes. dip = 90° - SD or, of course, SD = 90° - dip. It's an odd way of thinking about it since we don't normally imagine a semi-diameter for the Earth when we're standing on it. But when we climb from the surface to deep space, it's much more plain that the dip and SD are complementary.

BTW, I'm not entirely convinced on the angular diameter of the Earth in the image. It's an odd projection of the stars onto the flat view plane. But of course it's fairly close to the value you measured, no matter what.

When I first looked at this image (as I was watching the episode), I immediately recognized the star clouds in the Sagittarius Milky Way. Then I spotted the "claw" of Aquila, which I have long used for star-hopping to that gorgeous star cluster, M11. Then I spotted Altair and even the little constellation Sagitta above it. At that point I went looking for my favorite unofficial constellation (something that I think of either as the Oryx or the Broken Lyre) which includes two nearby stars, 70 Ophiuchi and Barnard's Star. But it's missing in the scene... Aha. It must be behind the Earth!

One of the nice reasons for knowing this unofficial constellation, the Oryx, part of which was briefly in a well-publicized semi-official constellation called the "Bull of Poniatowski", is that it sits right above the celestial equator at 18 hours right ascension (0° Dec, 90° SHA). And if that spot is directly behind the Earth in this scene, then directly above the Earth (and behind "us" as the "camera's viewpoint" must be the celestial equator at 6 hours RA --very close to Orion's Belt. In other words, if we could turn around 180° in that imaginary but realistically drawn scene, we would see Orion. That makes the Sidereal Time 6 hours, more or less, for an observer directly beneath us. That observer would see Orion and "us" right at their zenith.

I've been meaning to write something about the uses and amusing apperances of the Oryx (or Broken Lyre) for years... I'm using this as an opportunity to get that rolling. It's easy to see this little pattern around midnight local time this week right on the meridian.

Finally, I think there are two other navigational stars present in the image (besides Altair and Rasalhague). It looks like Antares is displayed in the far lower right. Hard to be sure because of the low range in brightnesses/diameters used to display the stars. And Sabik should be between the Earth and Antares, but that hardly counts as a navigational star. 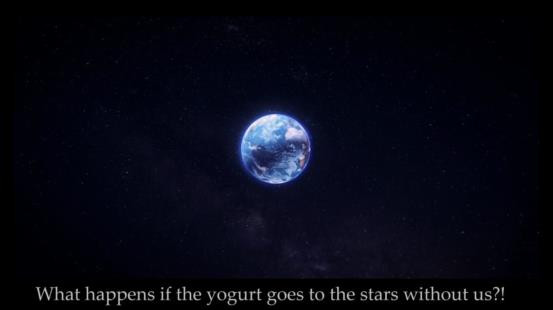 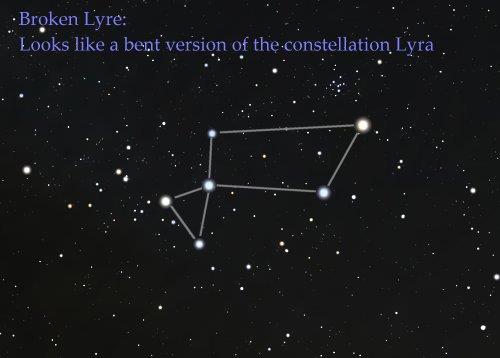 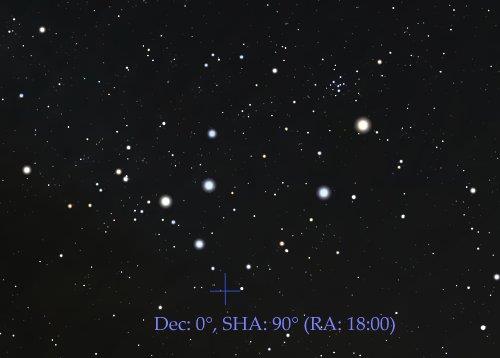 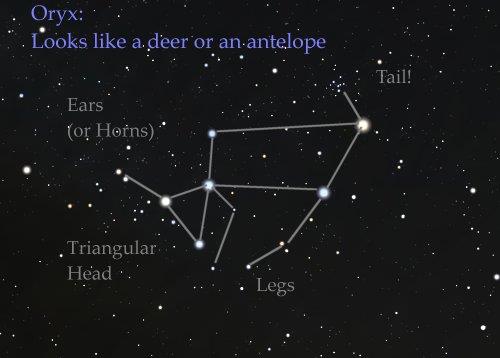 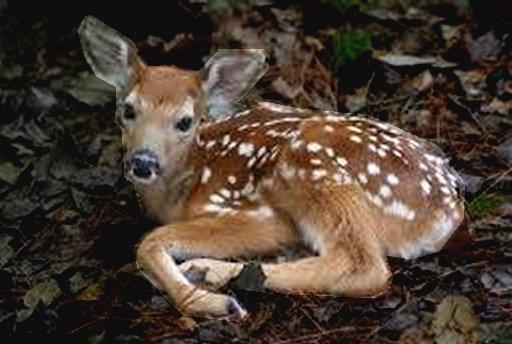