Tony Oz you wrote:  Alas, I give up. Without Chichester's actual data (AP coordinates for LoPs, and HOs) it is pointless to try to reconstruct anything about his flights. Does such information exist?

Tony. I drafted this masterpiece of navigational logic before I read that Gary was emailing you some stuff.  I’ll post it anyway in case it’s of value to any of our silent watchers.

Tony. Nil desperandum; It’s all there, as I said in the previous message I posted.  You’re looking in the wrong place.  I suspect you’re looking in the Observers Book on Astro-Navigation Part Four, a utility edition thrown together quickly by George Allen & Unwin around 1941 when courtesy of Mr A Hitler paper was in short supply the UK, printing capacity was limited, and Sir Francis was trying hard to enter or had just entered the RAF.  The diagram you were looking at is just a quick diagram to show the principle.

You need to be looking at the fourth chart posted by Gary at NavList: Re: Wind Velocity from Three Drifts (150042) (fer3.com) .  You’ll see the datum LOPS drawn very faintly.  Where they cross the lat & long grid is the assumed position.  I’ve gone over them in red on my copy below.  Chichester’s Bygrave A & a values are there too, except I couldn’t find the ones for 04.00GMT.  I’ve stuck a couple of estimates in courtesy of ‘Navigator’ His actual and his datum LOPs for 05.00GMT appear to be coincident.   I would guess the angle at the pole of the PZX triangle H at the date, place, & time of the shots is longitude east-(360-GHA Sun).  It should be easy enough to work out.  My copy of Chichester’s chart from my 1946 first edition of Arthur J Hughes’ ‘History of Air Navigation’ is unbound without the centrefold.  I’ve added a photograph of that too at 4.08MB for you to study at high magnification. DaveP 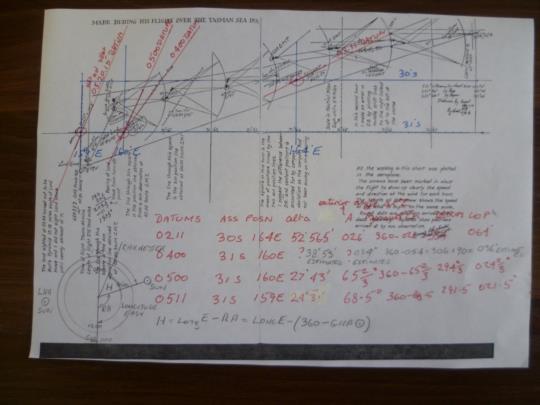 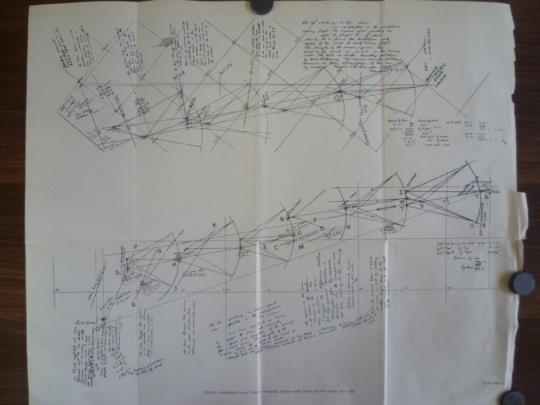