Tony Oz you wrote: My questions are:

I'd like to re-do all the LoPs myself, when exactly was the flight made in 1931, I'll be looking for Sun's ethemerides of the date.

You have to remember that Chichester’s astro was largely self-taught, so he’d probably developed a few foibles.   Also, although he might have practised a lot on the ground, even to the extent of taking sextant shots running down the beach, these were probably his first astro shots in the air any distance from land, so he was learning and modifying his technique as he went along.  HC and Azimuth are there you just need to play around until you find them, and then massage the values written down.

His first reasonably followable LOP is at 04.00GMT on 28th March.  Before take-off he drew in a tiny straight segment of a small circle of position passing though 31°S 168°E.  He did this by using his Bygrave slide rule to calculate the Sun’s altitude ‘a’ = 34°27’ and azimuth ‘A’ =? 61°37’at that position and time.  Except ‘A’ isn’t the azimuth.  The azimuth is actually 360°-A.  I.e. 298°23’.  However, he wanted a pre-computed basic position line at 04.00, so he’d probably developed a foible of subtracting A from 90° and drawing that line on his chart through 31°S 168°E. You can see where he’s done that and noted the time, ‘A’, and ‘a’ against it.  Then when he took the shot, he applied any necessary corrections and drew in his actual LOP at 04.00.  I think the short cross marks are simply hachuring to make his actual LOP stand out.  Usual caveat. I could be completely wrong.

I’m not sure if the square on this line is an MPP of if he’s simply saying “ I’m somewhere on this line”.  If it’s an MPP, there’s no indication how he decided to place it at that position on the line.  Perhaps he ouijad it.   I'd like to think I completed the attached the hard way, but I used 'Navigator'.  Hey, I'm keen, but I'm not that keen.  DaveP 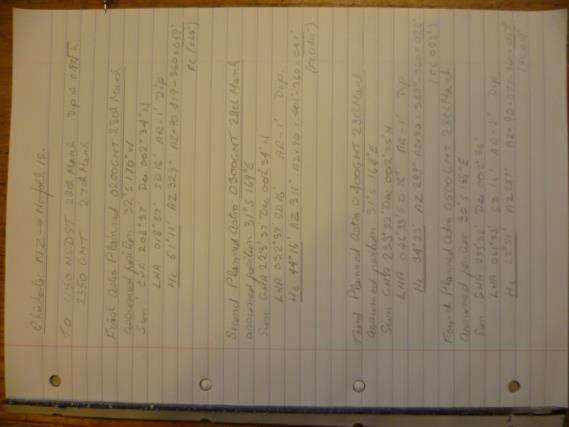