Gary
Thank you for reminding me.  Chichester was using three drifts.  I have to admit, I found the chart in my copy of his book too splodgy with printer’s ink to really follow what he was up to.  I’d forgotten there was a larger version in Hughes’ book.  Having enlarged your prints, I think I can finally see what he was doing although you still need a fair amount of imagination.  Looking at the NZ to Norfolk Is. chart, I think that before he took off, he drew in his first heading which he’d worked out from the forecast wind.  Then at various times he estimated his air position and scribed arcs equal to his TAS.  It’s had to see this because he didn’t make an obvious mark at those air positions before using them.  Then from those air positions and drew back lines at 30 degrees to his anticipated main heading.  The lines are so neat that I can’t believe he did this in the air in a tiny biplane unstable because of the borrowed floats and likely to go into a descending spiral every time he let go of the stick to navigate.  He might have just managed with rudder except he was head down. Then, while airborne, he applied observed drift to headings and drew in tracks from where the back plotted headings intersected the TAS arc.  Where the tracks crossed was his DR position, and the line from his air position to his DR position was the wind.  This is sometimes made more difficult to see, because on some headings the drift was zero.  He could have done this separately from his actual plotted track, but maybe his chart was pinned to a Bigsworth type board which made one handed navigation easier.  He couldn’t use a knee strap Dalton style computer, because they were still at the protype stage, if that, and a course and distance computer would have been difficult to use with one hand. Thanks for pulling me up on this.  DaveP 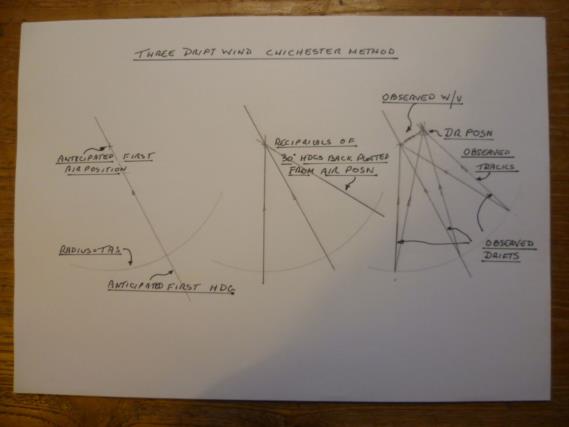