That appears to be a good example of Wikipedia behaving badly. It's a muddled article that may have been quick-translated from another language for English Wikipedia, possibly from German since the references are all German language. The very words used to title the article are misleading: the stars are not the key --they're merely a backdrop. And it's not triangulation, except by a loose analogy. The method in question seems to be nothing more than the method which I have discussed many times over the past ten years: position fix by visual observation of artificial satellites. It's easy, accurate, independent of local level (neither horizon nor corrections for deflection of the vertical to worry about), and it requires no sextants or other special instruments, though binoculars help, and ideally this task should be automated.

You can try this method yourself from your own backyard. Go visit heavens-above.com (or similar service) and enter a location that is, let's say, 20 miles from you, but not your exact location. Look for nice high passes (angular altitude >45°) of the ISS. Zoom in on the sky chart for a part of the pass near a bright star or recognizable pattern. Then do the same for a point fifty miles away from there on the other side of your actual location. It's best if the offset in position is perpendicular to the track of the satellite. Now go out and observe! The satellite will pass between the two plotted tracks among the stars along a path whose distance from the plotted tracks is proportional to your distance from the poinst on the ground (without very accurate timing, you should treat this as a line of position). See how it works? Most celestial navigation enthusiasts find this method far too easy or too "alien". What? No sextant?! No paperwork?? No fun! A significant complaint about it for many types of navigation is that you need relatively current orbital elements (less than a week old and better if they're less than 24 hours old), and you need some sort of basic computer, like a low-end smartphone, for example.

Finally, the Moon is a satellite, so you can get a position fix on Earth (or in near-earth space) by observing the Moon's position against the background stars. You can do this by measuring angles from the moon's limb to bright stars. That's a position fix by lunar distance observations. I first wrote about this over ten years ago when I noted that you can get latitude by shooting a lunar, which is such a crazy set of words to say that I had to investigate further. And in fact, when UT is known, you can get a lat/lon position fix by shooting lunars with your sextant, but you'll need a reliable accuracy of 0.1' in the observed distances (that's possible with averaging, but tough) to get a position fix accurate to six nautical miles (not great but interesting and potentially valuable under some circumstances). As with observations of LEO artificial satellites, this method does not require a horizon and is immune to all issues with determining the vertical, including deflection of the vertical. If you lived on Mars, where the moons Phobos and Deimos are relatively close to the planet, this would be a valuable method, since the gravity field of Mars is much "lumpier" and even sextants with sophisticated artificial horizons would suffer from large deflections of the vertical. 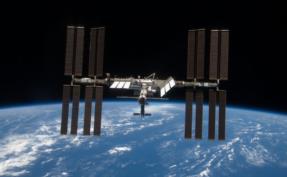 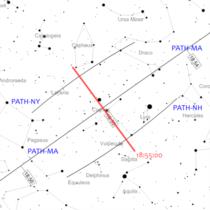 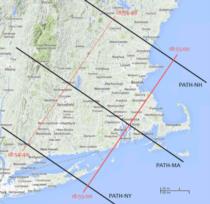