Reply
Re: Whole Horizon Mirror vs. Split Horizon Mirror
From: Stan K
Date: 2015 Nov 24, 18:27 -0500
Nice detective work, Frank.  I downloaded all the Navigator's Newsletters when they became available a few years ago, but I didn't read them all, and I didn't remember David's article.  But who gets credit for the "pithy summary" is not as important as the fact that David and John agree on the point.
I'm fortunate enough to have two Astra IIIBs, one with a traditional split mirror and one with a whole-horizon mirror, so my students can compare apples to apples under various conditions.  Before I had the two Astras the comparisons were unfair, as the two sextants were significantly different, and some other characteristics of one might have outweighed the feelings about the mirror differences.
Stan

Stan, you quoted from John Karl's book:
"the whole-horizon mirror makes easy sights easier, and hard sights harder."
Yes, indeed, that's in his book, but he's not indicating his source for that pithy summary. John Karl is quoting David Burch, apparently without credit (naughty, naughty! ...but these things happen innocently in a field like celestial navigation). Burch's version reads:
"full-view mirrors make the easy sights easier, and the hard sights harder".
In fact, David Burch's article on this issue forms the basis for John Karl's entire section on this topic (see below). To read Burch's original article, download volume 4 of his compilation of issues of the Navigator's Newsletter here, and go to issue 91, pages 8-9. 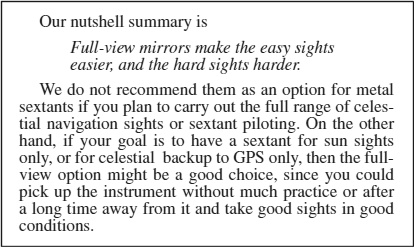 At first I wasn't sure which version came first, John's or David's version of this "pithy summary". But the very next item in that issue of the Navigator's Newsletter is a notice announcing the first celestial navigation conference that I organized at Mystic Seaport back in 2006. Ken Gebhart had convinced John Karl to attend since he was still writing his book. I remember talking to John after my lunars presentation, and the book was getting close but it was not done. So that's the order: David Burch said it first.
For everyone's further reading pleasure, here are links to the four compilations of all issues of the Navigator's Newsletter:
Volume 1 Issues 1-31
Volume 2 Issues 32-61
Volume 3 Issues 62-88
Volume 4 Issues 89-99
Frank Reed
Conanicut Island USA