There’s an ice cream for the first person to say which aircraft’s nav-station it is.  DaveP

Well I didn’t have to fork out for any ice creams.

The photograph on the Szextant B52 Blog and claimed as a B29 Nav-Station was actually a photograph of Fg Off P Ingleby in a Lancaster BMkIII of No 619 Sqn, No 5 Gp, Bomber Command at RAF Coningsby, Lincolnshire on 14th February 1944 taken by Flt Lt SA Devon RAF Official Photographer.  The reason I can be so certain is because it’s more common black and white version (below) is Photograph CH12288 from the Imperial War Museum Collection.  It was placed into the public domain for non-commercial purposes some time ago.  How it came to become coloured on the Szextant Blog is less certain.  Perhaps Devon was experimenting with early colour film in Feb 44, but the Air Ministry found it easier to produce it in black and white.  Alternatively, this is just another feature of digital magic.

The side view of the set on the right has to be Gee MkII; No5Gp didn’t start experimenting with LORAN until around Oct44 (it would have been in addition to Gee in any case).  It’s unlikely the astrograph was used much by Ingleby.  By Feb1944, he would have had Gee cover to the edge of enemy territory, and once inside enemy territory, whilst Gee would be increasingly jammed, they wouldn’t dare fly straight for long enough to take sextant shots. DaveP 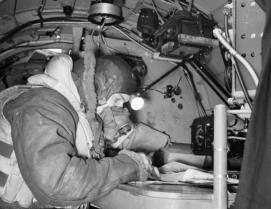