Morfydd, you wrote:
"That looks like the path of the Sun plotted on an altitude/azimuth projection. I can see the analemma and a path from East to West."

Thanks. That's what I'm seeing, too, and I wanted some confirmation that it wasn't all in my head. Looking at it more closely now, I'm seeing an analemma with a max solstice altitude of about 76°. That corresponds to a latitude of 37° which happens to match Silicon Valley, near enough, in California, and that would fit reasonably well with a 2018 Hollywood production. The Sun path that's highlighted seems to peak around 60° altitude and starts at azimuth 77° for sunrise (plus or minus a couple for all of these elements). In that latitude this would correspond to a date around April 15 or a symmetrically placed date in late August. The April date is reasonably close to the release date of the series. I'm not convinced that means anything, but I could imagine an effects artist throwing in that date for fun. It could just easily be the effects artist's cat's birthday.

This image is pulled from a wrist-mounted supercomputer (also known as a smartphone) that I spotted in episode 3 or 4 (can't remember) of the 2018 reboot of Lost in Space. I joke with participants in my celestial navigation workshops that I keep a database of all analemmas in pop culture, and this one jumped out at me while I was watching the episode. Funny, looking back at it now in this screen capture it seems much less convincing, but the details do seem to work out.

Time for the pointless nitpicking! : so.... we have here a space traveller, Maureen Robinson, who had planned to land on a planet in the Alpha Centauri star system, but got hijacked by aliens with killer robots (the origin of the "robot" in this reboot), sent through some sort of wormhole thingie and dumped on an entirely different planet in another galaxy. The terrestrial analemma would be of no use either on the planet they were trying to reach or on the planet that they actually landed on. Hence the display makes no sense, technically speaking. So there!

Ha ha ha. Obviously trivial nitpicking, and I give the effects artists big credit for using graphical details that are, in fact, at least in the right ballpark. :) The original Lost in Space also occasionally apid good service to positional astronomy. The legacy continues. 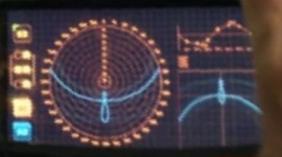 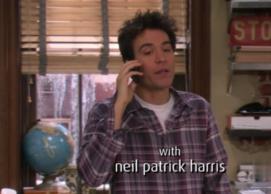