Reply
Re: Virginia, Amistad, Mystic, and Ernestina
From: Jackson McDonald
Date: 2014 Aug 16, 17:36 -0700
One of my brothers and I had the privilege of sailing as guest crew on the tall ship Virginia in 2009 -- Boston, Gloucester, Provincetown, New Bedford, Norfolk (her home port).
Launched in 2006, Virginia is a knockabout (no bowsprit) pilot schooner, built on the plans of her 1917 namesake, with modern safety features such as watertight bulkheads.  She is as fast as she is beautiful:  we won the Great Provincetown Schooner Regatta that year.
It was a memorable passage:  knowledgeable skipper, amiable crew, good cook, and many hours on watch and at the helm.  It was also the first time I ever held a sextant and took a sight.
Shortly after our passage, the "great recession" took its toll, with the Commonwealth of Virginia cutting funding vital to its own flagship.  Since then, Virginia has been mothballed and recommissioned.  This year she has fallen on hard times again.
It will take deep pockets and a solid business plan to save this sublime vessel from a fate beneath her dignity.
Some photos attached.
JMcD 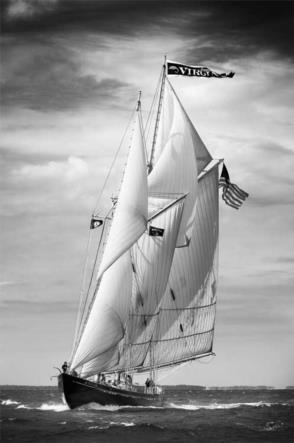