The Moon will occult Venus in daylight on Monday, December 7. In most of the US and Canada, you'll be able to see both the immersion and emersion events. At minimum, this is a great opportunity to see Venus in daylight without much effort. In fact, you should be able to see it easily without optical aid as a small bright dot right on the leading edge of the crescent moon a few minutes before the occultation. Here's a nice article describing the details:
http://www.skyandtelescope.com/observing/moon-flys-by-catalina-occults-venus-on-dec-7th120220150212/.

Observing this through binoculars or a sextant or small telescope will reveal the main difficulty of using Venus for lunars. Although this is an occultation rather than a lunar, you'll see that the event takes some time since Venus has a relatively large apparent size.

I'm attaching a photo I took of a similar occultation on the morning of December 26, 1978 (film camera, of course, back then... much easier today). The dramatic contrast between Venus and the Moon is real. The Moon is actually dark grey and only appears white when our eyes are dark-adapted or camera exposures are long. But when seen side-by-side with Venus, which is really white thanks to its planet-shrouding, dense clouds, it's much more obvious that the Moon is a dark object, with low albedo. 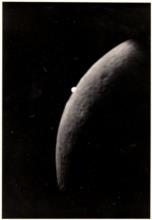