"It says 'Veus in daylight'. It does not say  'venus when the sun is above the horizon'."

Ha! Probably at about the same time you were writing that, I was messing around with my spreadsheet. The Sun had just set and the Moon was about to rise. I saw that Venus was at an altitude high enough to be seen in the middle of a neighborhood with lots of trees. I noted the altitude (~18°) and azimuth (~215°) and stepped outside. It was civil twilight (the Sun was about 2° below the horizon), so it was still fairly bright out. But certainly not as bright as mid-day.

I used the tilt sensors in my phone and the compass in my watch to get an idea of where to look. I actually just guessed at first, but apparently I have a terrible sense of azimuth. I know where North is relative to my house, but my estimation of 215° was way off. (I was probably looking more in the direction of about 240° at first.) When I looked in the correct direction, all I could see was the tree in my back yard. So, I went and stood under it.

Thankfully, Venus was right where my spreadsheet told me she should be. I snapped a quick pic (attached) before going back inside. [The tree in the image is in my neighbor's yard.]

I am sure that if any of my neighbors were watching me taking pictures of an apparently empty sky, they are now certain that I am crazy. XD 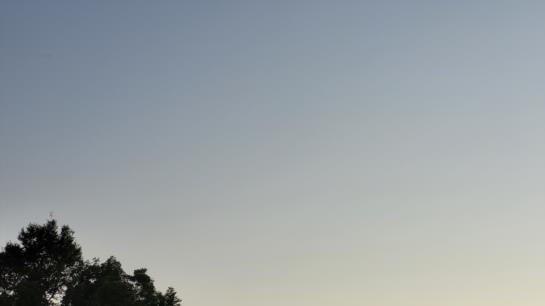