What is the cut-off time  for a "daylight" observation?  I cannot see the horizon so I would use the sunset time from a sun app.

I think it’s generally agreed that your official sunset time is when the Sun’s upper limb disappears below the visible horizon at your location for an observer at sea level and allowing for refraction.  Years ago, we would have obtained the time of sunset from the tables and graphs in one of the almanacs, but these days, for the home observer, it’s too easy.  Just type ‘Sunset’ into Google, and it’s the first thing it tells you, 19.50 BST, 18.50UTC in my case (see attached screen shot). I thought I’d better test this against ‘Navigator’, and 18.50 gives Ha of the Sun’s centre as zero. The upper limb doesn’t finally disappear until 2.5 minutes later.  By which magic Google does it, I’ve no idea, but it’s both amazing that Google’s so clever and alarming that it remembers so much about me.  DaveP 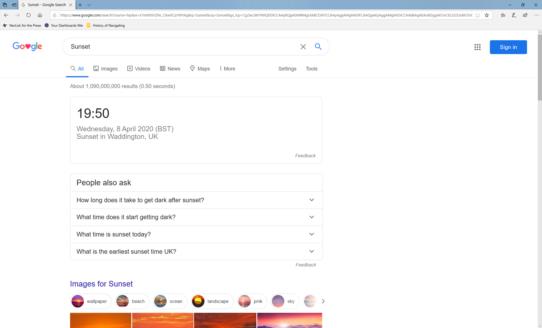