I mentioned that in geology and geophysics "declination" is the term universally used instead of "variation". I was looking for an online article that emphasized this and talked about the significance of magnetic declination to the plate tectonics model and how it vindicated the "obviously wrong" theory of continental drift originally advocated by Alfred Wegener (for several decades from 1912). A quick search turned up some lecture notes from a UCSD geology class:
https://igppweb.ucsd.edu/~gabi/sio15/lectures/Lecture04.html.

The "magnetic stripes" described in the notes are fossilized magnetic fields in bands parallel to the ocean ridges, especially the mid-Atlantic ridge, that demonstrate both magnetic field reversals and the fact that these huge swaths of the ocean floor were created nearly simultaneously in a relatively short period of time. And this discovery was made by measuring "magnetic declination" in rocks. If you scan through the notes, you'll find "magnetic declination" several times but variation is only used in the sense of "change". What's the point? Magnetic "declination" is the normal, exclusive term in geology for the property that navigators refer to as "variation", and magnetic declination was the key, the central "smoking gun," that proved sixty years ago that plate tectonics was the underlying principle of all of geology.

The image below of the fossilized magnetic field in the ocean floor off the Pacific Northwest shows a striped pattern with distance from the spreading ridge proportional to age. This is typical throughout the world's oceans. Magnetic declination (or variation!) reverses nearly 180° from one stripe to the next in a geomagnetic reversal event. 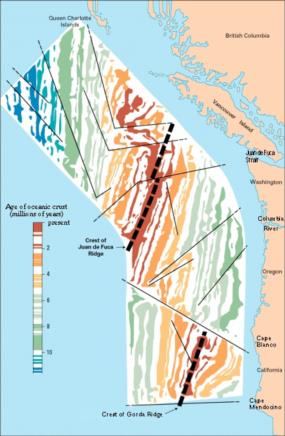