Reply
Re: V-Correction for Sun?
From: Stan K
Date: 2016 Oct 14, 23:08 -0400
Herbert,
I have to believe the GHA column is in degrees, minutes, and seconds, 359º10'20", which rounds to 359º10.3', in agreement with other reliable sources for the accurate value), and that the GHA NA column reproduces the Nautical Almanac values, but what is the GHA Tab column?  Oh, I get it now.  GHA Tab is the hourly value from the Almanac, which, if there were a v-correction for the Sun and it was not on the hour, would change the GHA NA value, which is not the Almanac hourly value but the final value.  Reading your message again, I think I have interpreted it right this time.
Again, as I said to Sean, I was right when I said "I know of no other program that even attempts to reproduce the Nautical Almanac values for the hourly GHA of the Sun."  Now I know of two.
Unfortunately, even if I tried to use the method you described, which is not quite the same as what I did in Celestial Tools, and it proved to be perfect, I could not use it because of my mandate for imperfection.  My 99% still leaves the 1% uncertainty, requiring students to do the work themselves.
FYI, in the "Accurate" mode, Celestial Tools is a little different than your program in that it uses the "accurate" value, not the Almanac (tabulated) value, of the hourly GHA, and applies interpolation tables to it, after calculating the v value.
Stan

Stan,
Here is the output of my own program. The fact that it matches the NA data exactly does not mean much, because I have not brought it up to date since spring 2013. The NAO may well have used a different ephemeris, precession-nutation model, delta-t and what else there might be for 2016. I did not check.
In my program you can see the "correct" GHA, the tabulation for the full hour, the GHA as if it were computed from tabulated values and interpolation tables, and the difference between the "correct" value and the one obtained through the NA.
I never even thought of offering my program to the public because I have no intention to maintain it.The code is trivial and does exactly what I described in my previous message, no more, no less.
Herbert 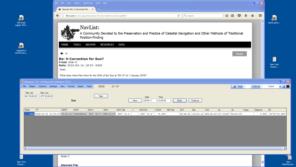