Yesterday I decided to get re-acquainted with the navigation stars by taking observations on all of them that were available after evening nautical twilight. I set up my 2102- D so that I could use it to preset my sextant. I used my Kollsman periscopic sextant in my sextant mount which then allowed me to preset the altitude into the sextant and turn it to the proper azimuth in the mount to find the stars.

The 2102-D showed 25 navigational stars above the celestial horizon (including Polaris) but seven were blocked by houses around me so I would be able to shoot only 18. I wrote down the altitudes and azimuths of the stars and then went out to my sextant mount and started shooting. It took me 31 minutes to take all 18 individual sights, I did not use the averager. I reduced all of the sights by computer for my location and the sigma of the 18 shots was 2.54' so I am pleased with the results. Being able to use the sextant mount made it easy for me to identify the stars, even the ones that I rarely use such as Rasalhague and Eltanin.

I have posted before about how to make these modifications to the 2102-D:

I realized recently that the ecliptic plots as a circle so I didn't need to do all the calculations of points on it that I did originally. The ecliptic has a radius of 90 degrees as measured on the red disk, the size of the equator on the red disk. If I were doing it now I would set a drawing compass on this radius and place the center point along the 270 degree LHA line and displaced 23 degrees from the north pole. 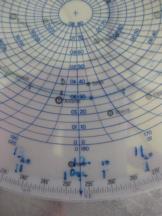