Thanks to the image samples that appear at the bottom of the NavList page I came across a thread from February-March 2009 investigating the navigation methods used by Frank Worsley on the voyage of the James Caird from Elephant Island to South Georgia on the Shackleton expedition in 1916. Brad Morris had located Worsley’s original log in the Christchurch Museum, New Zealand and obtained heavily restricted copies covering the period of voyage. Brad, with help from the late George Huxtable, took great pains in transcribing the content and the last version of this valuable resource is posted here.

I have spent some time pawing over the transcript and find that all of the navigational calculations can be reproduced with a couple of exceptions.

Worsley performs 2 noon sights and 7 time sights (plus 1 just prior to departure). The method used to reduce the time sights is explained by Henry Halboth in the document attached here.

Worsley’s distance to destination and DR calculations in the log are obtained by mid-latitude sailing formulas.

I have made some assumptions about navigational practice at the time and would like to solicit feedback as to whether they are correct, reasonable or otherwise.

1)    The James Caird leaves Elephant Island at noon (15:40 GMT) the 24th of April, 1916. On each subsequent days an underlined Dead Reckoning (DR) position is recorded on the right of the page. Early in the voyage it is sometimes noted that the DR position was for a 24 hour period. Is it reasonable to expect that it would have been standard practice for Worsley to record a DR position every day at around 15:40 GMT?

2)    On days where a noon sight or time sight was available a second position appears and is often underlined. It is not the same as the position obtained directly from the sight and I suspect that it is an Estimated Position (EP) obtained by somehow advancing the sight to 15:40 GMT. This is the position that is used as a starting point in computing the DR position on the following day. Would it be normal practice to record an EP advanced to 15:40 GMT in this way?

I can’t really fathom exactly what the numbers in the sum represent. Any ideas?

I have gathered the information in the log into a spreadsheet which reproduces the calculations and paints a fairly clear picture of the voyage. The information in the log has also been recorded in a .kml file (attached). After saving the file, clicking it should open it in Google Earth. I have also attached some of the views that can be generated by selecting the appropriate data.

3)    Track (yellow) and rhumbline (orange) from Elephant Island to a point 27’ West of Wallis Island. Worsley was aiming here until late in the voyage when, given the uncertainties in their position, Shackleton decided to make for the centre of South Georgia rather than hold off to the west in a storm.

In the original thread there was quite a bit of discussion as to the location and identity of Cape Belsham on Elephant Island which served as a departure point and for calibrating the chronometer. I don't have anything to add other than to note that Worsley’s position for it is 2.8 nautical miles from the modern position and 5.8 nautical miles from the eastern tip which has been suggested as originally being Cape Belsham.

Finally it was pointed out that by 1916 time sights were obsolete and had been replaced by intercept-azimuth LoP’s. Any thoughts as to the practicality of using the modern approach would be in a small boat in heavy seas while lying on a pile of ballast rocks? 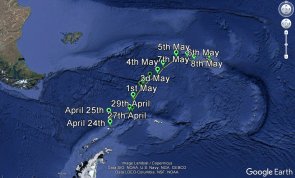 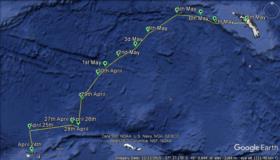 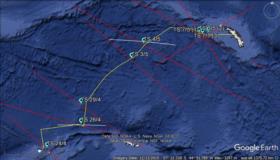 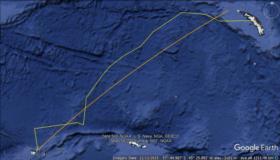