"easting and then northing"

There is a logic to this choice, and it can be summarized with one, very familar shorthand: (x,y).

Standard, traditional cartesian coordinates which we all learn in school are x,y coordinates, and in the usual, nearly universal display of those coordinates "on a page" x is horizontal, increasing to the right on the page, and y is vertical increasing up the page. Given this traditional and almost ubiquitous orientation of coordinates, when carried to geographic coordinates, differences in longitude become x values, differences in latitude become y values, and positive x is to the right, positive y is up. Thus (x,y) becomes (easting,northing) and east and north are positive directions.

Note that these choices of ordering and positive directions are not "laws" of mathematics. They are conventions. But they're extremely common conventions, and that's why it makes sense to apply them in geography. And it's not just antiquated systems like grid coordinates. You'll find the same ordering, for examplle, in the Google Earth standard data format known as KML.

I'm attaching a KML of a circle of position for a Sun local noon sight taken from the vicinity of Mystic Seaport Museum on the summer solstice. You can download this file, and then if you launch it ("double click it"), it will open in your KML viewer which should be Google Earth unless you have not installed Google Earth (and if not, why not?!). You can also open this file in a common text editor. If you open "options" on the downloaded KML file ("right click it"), then you can open it in a text editor, and you will see that it is quite simple inside. There are about 25 header lines, which you can ignore, followed by a long list of lon,lat pairs. If you scroll down far enough, you will find the pair -71.9800,41.3610. That's a longitude of 71.98°W and a latitude of 41.361°N ...lon comes first, W is negative, N is positive, following traditional (x,y) coordinate convention. 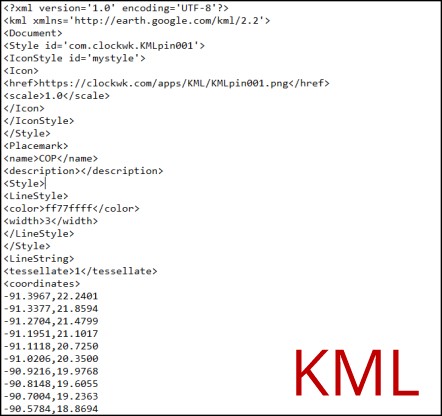