Reply
Re: USS Fitzgerald collision with container ship
From: Stephen N.G. Davies
Date: 2017 Jun 17, 15:27 +0800
From the inferred angle of impact, it would appear to be a nice judgment to decide from any radar logs as between the Fitzgerald being the give way vessel (if to starboard red appear, ’tis your duty to keep clear) and the give way vessel being the container ship because it was in the overtaking arc. If one vessel was making that call using exactly calculated angles on the radar and the other was making it by visual judgment (lazy) and was on autopilot (even lazier, but quite probable with OMBO), then one can see how the collision may have come about.
Most of the above waterline damage looks to me (when cross checked against the cargo vessel image) as if it was caused by the port bow overhang. That there was damage allowing water ingress is indicated by the first photo here where the Fitzgerald is obviously down by the bow and heeled to port. Hard to say where it is, but my guess would be a massive splitting of the plates rather than penetration.
The Arleigh Burke class draws 9.3m, but some 3 metres of that is the bow sonar dome, so the turn of bilge would be around 6m below the waterline. The ACX Crystal draws 9.5m at full load, but she’s obviously riding light from the photo with the bulb probably not more than 4-5m down. Ouch.
Stephen D
Dr Stephen Daviesc/o Department of Real Estate and ConstructionEH103, Eliot HallUniversity of Hong KongOffice: (852) 2219 4089Mobile: (852) 6683 3754 stephen.davies79@gmail.comdaiwaisi@hku.hk

A couple of images showing the damage to USS Fitzgerald. The vessel presumably rolled over hard at the moment of impact. In addition to the massive damage visible in these images, there must also be a gaping opening below the waterline. 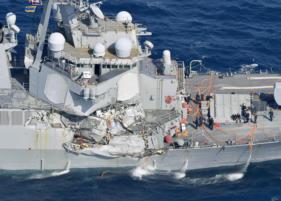 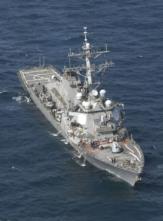