Dave Walden, you asked:
"do you have the planets SD in the PA column?"

No. I don't provide SD for planets at all --only for the Sun and Moon. Adding planet semi-diameters to the altitude correction was a crazy and useless feature in the USNO app detached from the reality of navigation practice, and it's one small bit of the genome that I did not transfer to the clone.

Below are two samples from my USNO clone for June 3, 2020. Venus was about as close to the Earth as it can get on that date. One set of data is just after dawn. Both Venus and the Sun are near the horizon and their parallax in altitude is as large as it can get during the day. Of course, since Venus is nearly the same size as the Earth, its SD and its parallax at the horizon are nearly the same number, but that relationship does not hold throughout the day. The second set of data shows details near local noon when both Venus and the Sun were above 71° in altitude at a location in southern New England. The parallax in altitude is significantly reduced.

We can confirm the numbers. To get the horizon (horizontal) parallax for any planet, take the Sun's horizon parallax, which is always 0.15', and divide by the distance to the planet in AUs. It's actually possible to make really good estimates of the distance just by drawing a little "view from above" Solar System chart if you have basic information about the positions of the planets, and if you have at some point in your childhood memorized the mean distances of the planets from the Sun in AUs (who hasn't?!). Venus is normally 0.7 AU from the Sun. The Earth is 1 AU from the Sun (definition). So when Venus is at inferior conjunction, lined up with the Sun, its distance from the Earth is 0.3 AU. That makes the horizon parallax on June 3 just about 0.15/0.3 which is 0.5'. That was also its parallax in altitude right at dawn. At any other time of day, it was 0.5'cos(Alt) which was 0.16' near local noon. These numbers match, nearly enough, what we see in the output from the USNO clone.

For anyone else, if you're new to celestial navigation and you're not familiar with the USNO app, it was (and will be again?) a nice resource for basic celestial data on a given date and time. My clone is accurate to one second of arc, well beyond the needs of celestial navigation, but it does mean that you will see differences of a single tenth of a minute in about one in six cases due to rounding, as in the samples that I have already posted. This is insignificant for navigation. The additional altitude correction data on each line in the original app and in the USNO clone should be considered with skepticism since there are certain editorial choices made in the original USNO product which are questionable. The simplest issue: there's only one altitude correction given for the Moon, and it is not "smart" (it doesn't switch up based on the orientation of the Moon, which easily could have been incorporated into the calculation). The USNO app and the USNO clone always assume Moon LL (lower limb) sights while in reality UL sights are common, even more common than LL, for the Moon. There's no provision for that, though you can do it in your head easily enough. In addition, the USNO web app offers no correction for non-standard refraction. It is what it is. 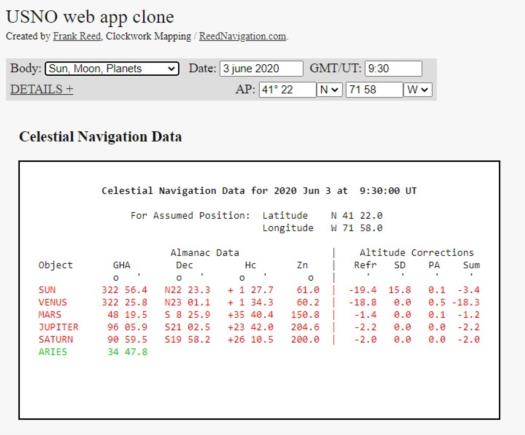 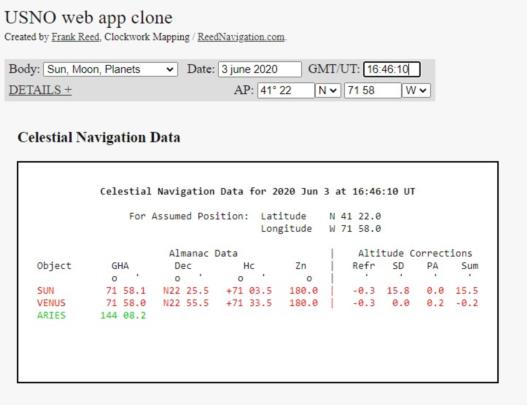