It might be lens flare, yes. I think the most likely explanation is reflection from windows. There's no indication in the video at all how or where it was taken. Given the poor camera work, I doubt that any care was taken to eliminate the "obvious". But let's suppose the observer is in an apartment in a city. The apartment has windows facing azimuth A, and on the other side of the room, azimuth A+180° (just to make the geometry easy). On that day of the year when the Sun rises near azimuth A, the Sun's image would be reflected off the window on the opposite side of the room and back to the window in front of the observer, creating a separate, fainter image of the Sun. Note in the second half of the video, the general pattern of clouds covering the upper part of the fainter sun resembles the pattern of clouds covering the upper part of the real sun (they look "somewhat" different, I would say, because the real Sun is over-exposed, and its image "bleeds out").

These videos of double suns have gained some popularity in the fringe "weird science" community in recent years. Some suggest that they might be evidence that we're "living in the Matrix" (if you type "are we living in the" in a Google search box, it will offer "the Matrix" as one of the top suggestions). So that's always possible, of course. The second sun is real, and we're all actually living on Tatooine. 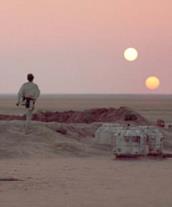