Yes, that sort of "mock sun" has a well-understood origin. They're commonly called sundogs and sometimes parhelia. They appear as glowing patches usually with a spectrum of colors, like in a rainbow, often seen at sunset about 22° to the left and/or right of the sun. There is a nice Wikipedia article about sundogs. 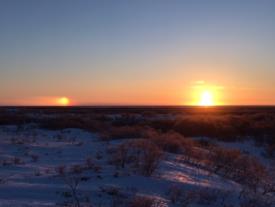 Your photo is a good match for that phenomenon though this sundog isn't particularly colorful. Sundogs are caused by refraction through aligned ice crystals in thin cirrus clouds high in the atmosphere.

Note that the double sun in the video at the start of this thread is definitely not a sundog and probably not a phenomenon in the sky at all. Instead that "double sun" is probably a result of reflection from glass --either in the camera optics, as Peter Monta suggested, or from a window and some reflective surface on the opposite side of the room (could be another window, could be something as simple as a framed photo), which is my preferred model.