Martin Kuhnl you wrote: Dear community members, i have been trying to program a casio application to solve the two body running fix for some time, going along with the approach of kenneth gibson who published a method in the Journal of Navigation in 1994. I have been trying to implement his formulas but either i make serial mistakes or the formulas are not correct. Can anybody give me some feedback or tell me if the algorithms mentioned in this article are correct? i found some other approaches to approximate the running fix not rigoroously in an article by Geri who mentions a´hearn and others who published in the journal of the institute of navigation. does anybody know the algorithms mentioned in those texts?  thank you very much in advance, martin

After much tearing out of hair I’ve come to the conclusion that Mr Gibson’s formulae are basically correct.  They appear to be mathematical expressions for sliding the first LOP along the second LOP in such a manner that the first LOP moves across the Earth by an amount equal to the distance sailed between sights in the direction of the vessel’s course.   In itself, this seems to be an extremely long winded way of going about what a trainee navigator could do with a chart, pencil, Douglas protractor, and dividers in less than five seconds.  However, it could be a vital step if you wished to produce a complete navigation package with or without its own almanac where you just entered a start position, names of bodies, times of sights and sextant readings to achieve a running fix lat & long.  I’m sure several such packages must now be available for laptops & smart phones, so you could say that Gibson’s paper has been overtaken by the rapid expansion in digital technology, which have appeared in the intervening 25 years.  Incidentally, I notice Gibson’s method was published in the JoN ‘Forum’, which is more like a “In my humble opinion” bit at the back of the main journal, so it maybe didn’t get the same peer reviewing that it might have if it was in the main body of the JoN.

However, for those with no access to the JoN, Gibson’s suggestions are roughly as follows:

Start by imagining a fix where LOP1 and LOP2 would cross if there was no motion of the observer (MOO) between them.  He calls this a ‘Stationary Fix’.  This can be found by conventional methods, or mathematical whole Earth circle of position methods suggested by other authors, who he refers to in his paper.  Then he uses simple trigonometry involving the distance travelled between sights and the sines and cosines of the course between sights, and the two azimuths to work out the distance you would have to move LOP1 along LOP2 to achieve the running fix.  It’s less easily followed, because in his initial diagram LOP2 is drawn at right angles to his course, so the azimuth line of LOP2 and his course are coincident.  Next, he resolves this distance into a northing and an easting.  The running fix latitude is the stationary fix latitude plus or minus the northing.  The running fix longitude is the stationary fix longitude plus or minus the easting divided by the cosine of the mean latitude. The expressions are conditional depending where the course lies in relation to the azimuths of the bodies.  I’ve tried to explain it by redrawing his diagram to make it easier to follow.  It does work out if you work your way through it, but as I said earlier “If I was going there, I wouldn’t have started from here”. DaveP 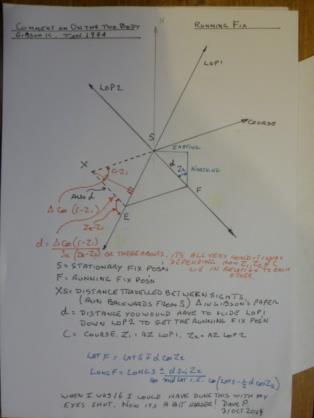