David Pike, you wrote:
" I looked at your tables first,but I'm rather keen to try Jupiter, because it's so bright at the moment"

Good plan. Jupiter is an excellent choice for lunars because it's a "dot" (or in more appropriate terminology, it has a resolvable disk). Split the dot on the Moon's limb, and you will have an accuate lunar. But since you're leaving for almost a week, when you get back that plan will be on hold. At 13° a day, a lunar choice that looks perfect on Monday can be sub-optimal by Wednesday.

You say you want Jupiter lunar distances and didn't find them in my web app. They're not that deeply hidden...

I'm attaching an example from my web app with Jupiter included, and displaying some of that "flexibility" I was talking about. The listed lunars are those in sextant range, every two hours, visible from your home area (roughly is good enough for this purpose). They're also listed in this case as decimal degrees, which is actually easier to work for the GMT/UT interpolation step. But if you prefer, you can adjust all these options. Occasionally a potential lunarian will point out that options like these were not availabkle historically, and therefore they should not be available in modern tables. To such purists I point out that they can exclude planet lunars and stick to the original objects. In addition, for the purists, my tables include the option to list the distances by GAT (Greenwich Apparent Time), which was the only option in the standard Nautical Almanac until 1834 (when, late in the game, they switched to GMT). 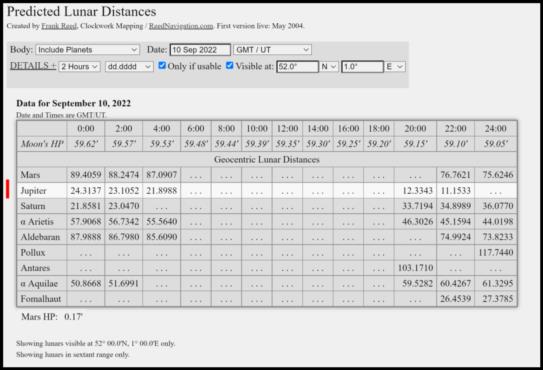