Ian Vaughn, you wrote:
"Either way, I'd bet on a Chinese survey team from 600 years ago over Google Earth's datum management.  This issue comes up often enough ESRI posted an article about it."

There is certainly a problem with data alignment in Google mapping products for China. In the image below, I have displayed the vector map overlay of roads and labels for Beijing along with the "satellite" view. They are out of alignment by about 1800 feet toward ENE. This is a huge error by the internal standards of Google's mapping work. The yellow lines in my image show the displacement. Note for example the labels for "Qiongdao Island" and "Middle Sea". If we shift them towards the left and down in the image, they fall where they belong. The oval road network for Qiongdao Island is also clearly visible displaced from the island.

To decide the case of the orientation of the Forbidden City, we need an alternate mapping product. The maps at openstreetmap.org are not entirely independent of Google (nothing is in 2021), but they at least strive to be independent. They show the same offset of 2-2.5° to the west of true north that Jim noticed and wondered about in his original post. I am inclined to believe that this is a real offset.

So why would the designers of the palace offset the complex from true north? First, the offset is certainly real on a time scale of millennia (if it is real at all). Precession would not change it. But bear in mind that this design choice was not made for western "scientific" standards. The palace is supposedly meant to echo the palace of the celestial emperors who are associated with the North Star. So, aha!, the palace pointed to the direction of the North Star six centuries ago! Well, no, the azimuth of the North Star ranged from 355 to 005° true back then. The average is still zero, of course. But perhaps by digging into the astrological significance of north and the standards of feng shui in traditional Chinese architecture, the explanation would be simple. I feel it's equally possible that the explanation for the offset is simply lost to history. It could have been a carefully-considered choice of the original designers which today would mean nothing to us. Maybe it's like chasing down the significance of Rosebud in the life of Charles Foster Kane. Seemingly fundamental, but ultimately trivial.

NOTE: I was just about to post this message, as written above, when Wikipedia provided a key detail. From the article on the Forbidden City: "This axis is not exactly aligned north–south, but is tilted by slightly more than two degrees. Researchers now believe that the axis was designed in the Yuan dynasty to be aligned with Xanadu, the other capital of their empire." I couldn't find the source for the Xanadu claim, and I don't see any reason to give it any weight. But at least we have confirmation that the offset from true north is probably real (within the limits of Wikipedia's meager quality-control). 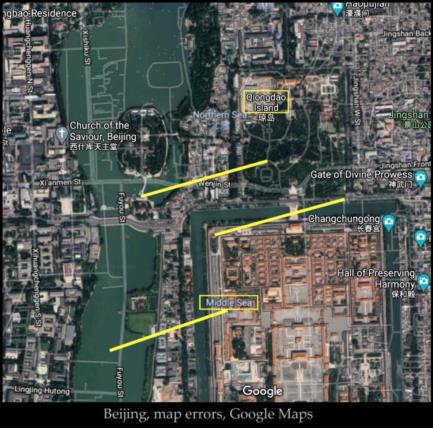 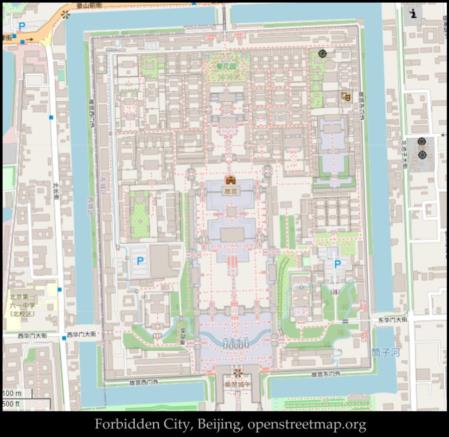