You wrote:
"where course is set to exactly east or west (i..e., 90 or 270), I’m noticing destination latitude does not equal original DR latitude (where we know latitude should not be changing).  The errors increase with distance greater than 100 nmi."

That's not an error. It's supposed to do that. The latitude does change. I'm sure you'll see it right away when you think about it. :)

An example for completeness:
Imagine an aircraft leaving London headed exactly due west initially and thereafter following a great circle path. Also image an aircraft leaving Accra, Ghana at the same time, also heading westbound initially and following a great circle trajectory. Both will arrive in the Galapagos Islands on the equator at 90°W longitude at about the same time after flying for nearly 5400 nautical miles. The flight from London will arrive inbound on azimuth 51° north of east while the flight from Accra will arrive on an azimuth of 5° north of east. That is, the great circle paths will cross the equator at an angle equal to the initial departure latitude where they were both initially flying exactly due west.

There's a nice way to sketch great circle paths on a globe, physical or virtual. Pick your endpoints and then orient the globe so that the apparent center of the circular disk of the Earth is aligned exactly between those points. I've done this roughly for the London-Galapagos great circle in the image below. 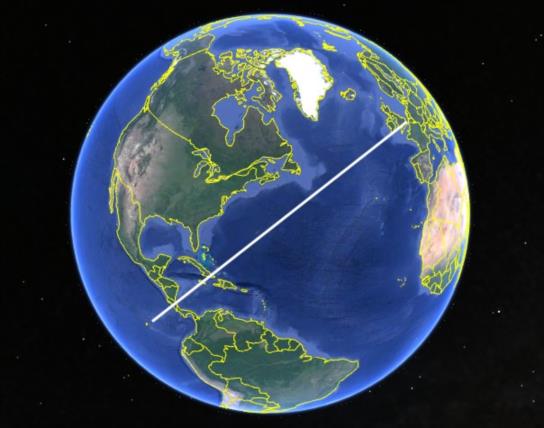