Reply
Re: Transcript Of Worsleys Navigational Log Book
From: Brad Morris
Date: 2017 Feb 1, 20:46 -0500
Bruce,
You specifically asked if they followed a line of latitude.
Yes, right at the end, the last few days.  They were intending to sail up around Bird Island and down to the whaling harbor.
Shackleton and Worsley had a discussion and Worsley was forced to admit he wasn't perfectly sure of his position.  Instead of Bird Island (just to the N of South Georgia Island), on the last 4 days, they sailed down a latitude line into King Haakon Bay.
I stopped the transcript at the point the lads begin coastal piloting.
One additional feat of navigation remained for Worsley.  He determines that there is a 1' error in latitude at King Haakon bay.  It's in "South", by Shackleton.  When we are done with the journey, I may be convinced to do the same for the celestial reduction at King Haakon bay.  I do have the page from the log ;-)
Brad
On Feb 1, 2017 8:34 PM, "Bruce J. Pennino" <NoReply_Pennino@fer3.com> wrote:

Robin:
This plot is truly amazing. I’ve wondered if anyone had plotted it or I had to go to one of Worsley’s books. I just reread Alexander’s description of the journey and there were several days (several times) when there was total overcast or they were just getting “beat-up”. Does the plot show they got to a specified latitude and then tried to follow the latitude? The small plot in  “The Endurance” does not show them following a line of latitude.
They were very skilled .Of course, being skilled can sometimes also help bring some favorable breaks or good fortune.
Most interesting and very well done!. Best regards.
Bruce

Just open both files together in Google Earth; File > Open in the menu. They'll appear in your "Temporary Places" (see attached image). From there you can choose which data sets to display and which not to by selecting individual items or directories. You can create your own directorties under "My Places" and copy whatever data you are interested in. You can inspect and/or edit the information associated with any item by right clicking it in the "Places" panel to the right or in the display and then selecting "Properties". It's all very standard and should be intuitive. I've done the mind-numbing bit of entering the data. You now have huge power and flexibility at your finger tips! 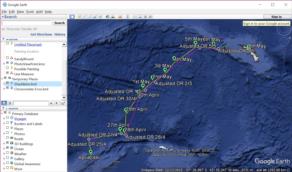