Reply
Re: Traditional navigation by slide rule (correction)
From: Gary LaPook
Date: 2016 Jan 12, 22:12 +0000
So, in total. A, B, and sin scale matching the A scale, that makes three.
Sin, Sin-Tan, Tan <45, Tan > 45, C and D, six more, total of 9 scales. One scale on the top frame, seven on the slide and one on the lower frame. Or, the sine scale for figuring set and drift could be on the upper frame to work against the B scale on the slide instead the A scale on the upper frame, which would require only 6 scales on the slide.
My K&E has ten scales on each side and my Picketts have 16 scales on each side, 7 on the slide,  so nine scales on one side should be easy leaving the back for instructions.
gl

The Soviet flight computer has a "K" scale to allow for a wide range of speeds and the "K" scale is useful for finding qubes and qube-roots, not needed for celnav. Instead. matching "A" and "B" scales for time-speed-distance, which covers two cycles, 1 knot to 100 knots, with the scond cycle marked in hours wouild be better. A sine scale to match with the "A" scale woud do set and drift computations to the needed accuracy.
Then have the normal "C" and "D" scales with trig scales, marked in degrees and minutes, to work against these scales for the celnav computations. An index line on the "C" scale at 97 will compute the dip correction. When the "1" index on the "B" scale is set to the height of eye on the "A" scale the dip correction will appear on the "D" scale lined up with the 97 index on the "C" scale.
The standard "S" and  "ST" (which also have cosine markings running in the opposite direction,) are sufficient for celnav using the  standard sine-cosine method. To also allow for the Bygrave method (which is more accurate when done on a ten inch slide rule) you must have Tan scales. Although the one tan scale found on the K&E rules is workable it is much simpler and easier to work if you have two tan scales, the second extending above the 45 degrees on the one tan scale.
Then some indexes to  make conversions easy, say a marks to convert NM to SM; KM to NM; (pounds to KG; liters to U.S. gallons, Imperial gallons to U.S. gallons useful for other purposes and easy to incorporate on a slide rule) see attached images of flight computers where such conversion indexes are standard.
gl 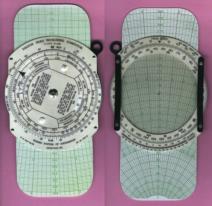