I love Ah Ha moments! Had a few (not enough!) during my career in medicine, but now with celnav, very cool!

I’m not quite sure what you mean by the suggested double sin/cos tubes arrangement. Could you send me a simple drawing and description of how it would work?

Currently, the long inner tube has scale A at top, then cos/sin marked in degrees and mins below, then the outer tube has another , identical scale A,(or is it B?) but not another cos/sin scale.

You find the sine or cosine by lining up the correct degrees and minutes and use the outermost  curser tube to find the appropriate number on the A scale.( eg sine 30 or cosine 60 gives 0.5). Multiplication and division are done by lining up the inner and outer A scales as appropriate. But I think you are suggesting 2 cos/sin scales concentrically working directly against each other? Perhaps the outer curser tube could have another cos/sin, or even cotan for Bygrave formula?

I had a feeling this slide rule could go further.

From: NavList@fer3.com [mailto:NavList@fer3.com] On Behalf Of Brad Morris
Sent: 16 January 2016 21:27
To: francisupchurch@gmail.com
Subject: [NavList] Re: Traditional navigation by slide rule

I have been following along but your last presented me with an Ah Ha moment.

Further, because the scale length is enormous, we have accuracy too!!

Now that was an Ah Ha moment for me!

photos of my latest miniFuller2 with sines and cosines marked in degrees and minutes and generally accurate to 1' except at the "squashed" ends of the scales.

The design format is my own, based on the Otis King which has 2 identical A/B scales(see attached of  both for comparison) Mine has that plus sine scale in black with cosines in red going the other way.

This slide rule does all the celnav triangle calculations to 4-7 decimal places, so for me is the ideal general purpose CelNav slide rule.This one is robust and seaworthy too.

I find the simple cylindrical slide rules easy and cheap to build with plastic drain pipe off- cuts and very little precision engineering, other than printing, cutting and lining up the computer generated scales. 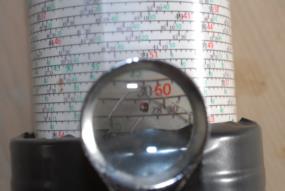 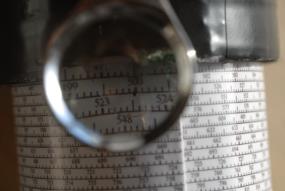 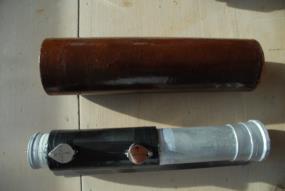 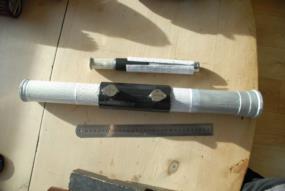