Reply
Re: Traditional navigation by slide rule
From: Hewitt Schlereth
Date: 2016 Jan 7, 08:39 -0800
Noell, there is a K&E with trig scales on the stator. I adapted one for celestial by taking a slide with trig scales from another K&E and using it in the model with trig on the stator. I think the trig/stator model was 4070(?). My collection is still packed away due to a recent move, but I think I wrote about this adaptation several years ago when the topic was slide rules.
Hewitt
On Jan 6, 2016, at 8:54 PM, Noell Wilson <NoReply_Wilson@fer3.com> wrote:

Here's the lower price end of the slide rule hierarchy -  Sterling 594. Still a log log. All plastic. Looks almost identical to a Dietzgen 1733 and some others with cheat sheet notes beside each scale. About $10 on eBay unless the seller is an optimist.

Log log scales aren't needed for CelNav. Only trig functions. Most USA slide rules have the trig functions on the slide. Some European ones have them on the fixed part. I suppose it depends on which you learned on. 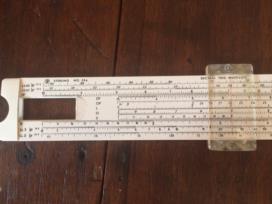