I have gotten sufficient control of using Visual Basic together with CorelDraw that I can generate a mathematically precise C-scale for a slide rule with just a handful of lines of code.  And having found that 3-D printing services such as Shapeways exist, this year could be the year for manufacturing a navigator's slide rule.

Perhaps 2018 could be the year to 3-D print/mass-produce Bygrave cylindrical rules.

But once you start getting the technical challenges under control, esthetics and usability start coming to the foreground.  John Brown and Gary LaPook have differing senses of what kind of increments would make the trig scales of a slide rule easiest for a navigator to use:  decimal degrees, or degrees and minutes.

I have attached a graphic to this message that illustrates what a portion of a slide rule tangent scale looks like in decimal degrees (top image), and degrees/minutes (middle image).

I have also thrown in at the bottom a picture of the logarithmic C-Scale that I have VBA code generating...with the code making the decisions not just on horizontal placement, but vertical height of the lines.

There are some of you who are reading these words who say to yourselves, "If Bob ever *does* learn how to 'mass produce' slide rules for navigators, I think I would like one."  Among this group of people, I would find it helpful to get a consensus as to whether decimal degrees or degrees/minutes would be easier to read.  After all, probably 85% of the total world market for the Mark 1 Navigator's Slide Rule is to be found among members of this group.  If the design doesn't suit us, then it is not much good at all.

Now, as I think about this a bit more, a guy is going to print/manufacture these things on an on-demand basis.  And it is might be a fairly trivial matter of changing a value in an equation to go from 5 (or 10) divisions per degree to 6 (or 12) divisions per degree.  Maybe a guy doesn't have to make a decision.  Maybe he can start out from day one with a design for the Mark 1 NSR, and the Mark 1m NSR, where the former is in decimal degrees and the latter is in degrees and minutes.

That said, I would still find it interesting to get a feel from NavListers on design preferences.

Thanks for your input and suggestions! 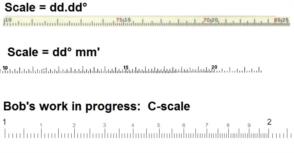