current correction angle     = 10.2 degrees
SOG (current from ahead)    =   4.45 k
SOG (from the stern)    =            8.35 k
There are many other scales on both the front and the back. Looking at photo 1, The "K" scale on the slide is used for time-speed- distance calculation, not the 1 our triamgle at the 60 mark and then that scale is marked in hours. The lowest scale on the frame covers one and a half cycles and when the cursor is placed on that scale then the value is squared on the scale immdiately above which is a "K" scale (three cycles.). The adjoining scale on the slide is a tan scale which is then used to compute the radius of turn which varies with the squaare of the air speed and the tan of the angle of bank. The "R in a circle" index above the 4.5 degree mark shows the radius of turn for the input air speed and bank angle and is based on the air speed in kilometers per hour and the radius in meters. I added a pencil "R" mark above the 5 degree mark which then gives the radius of turn with the air speed in knots and the radius in feet.
Scales on the back make corrections for the airspeed indicator based on altitude and temperature.
gl 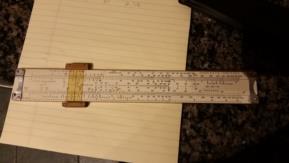